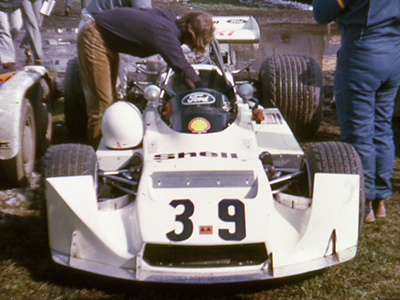 Former saloon car driver and property developer Teddy Savory founded Modus Cars in 1973 and poached ex-McLaren designer Jo Marquart from GRD as head designer. Neither of Marquart's previous companies, Huron and GRD, lasted long; neither would Modus. The first Modus was a multi-purpose monocoque car intended for Formula 3 (as the M1), Formula Super Vee (M2) and Formula Atlantic (M3). A derivative would also be built to Formula 2 spec for hilclimbing, another for Formula 5000 and two more for Formula Renault Europe, or Formula Super Renault as it was known in the UK.

Tony Brise contributed to significant success in F3 and Atlantic in 1974 and the cars were developed further for 1975 when Modus briefly became one of the UK's leading constructors. In 1976 Marquart produced a different design, the M7, for Formula 2 but that was very troublesome and the team closed down at the end of that season. Marquart carried on however to form Anglia Cars where he produced the Argo JM1 for 1977, basically a developed Modus M1. Argo survived much longer but the strain of keeping it afloat damaged Marquart's health and he died in 1993, aged just 57.