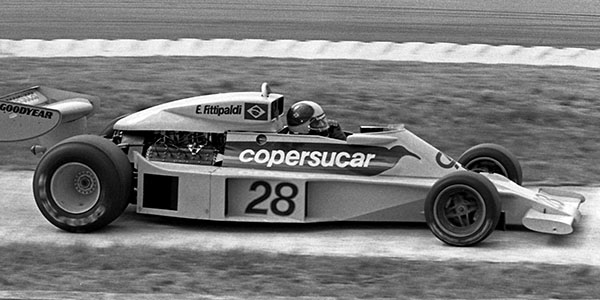 Emerson Fittipaldi in the Fittipaldi F5 at Silverstone in 1977 for the British Grand Prix. Copyright David Bishop 2018. Used with permission.

Dave Baldwin moved from Ensign to Fittipaldi and designed the Fittipaldi F5 for 1977. Despite some early promise, it proved no faster than the FD04 and at the end of the season was completely revamped as the F5A.

Emerson Fittipaldi's first season racing for his brother's team in 1976 had been something of a disaster, and designer Richard Divila was particularly demoralised by the experience of working with the former champion, who he felt was involving himself in design issues to the detriment of his driving. Divila suggested to Wilson Fittipaldi and team manager Jo Ramirez that another designer was brought in to design the 1977 car, so Ensign's Dave Baldwin was recruited in July 1976. He designed a car that was visually similar to his previous Ensign N176, with side radiators and a chisel nose, but the Fittipaldi F5's suspension took the more conservative approach of using outboard coil springs all round.

The new car made its debut at the Belgian Grand Prix where Emerson Fittipaldi was pleased with its performance and set 16th fastest time on the 26-car grid, just a fraction of a second behind the strikingly similar Ensign N177. He retired early from the race when heavy rain interfered with the car's electrics. A rear wheel flew off the F5 during practice in Sweden, and Emerson had to use the older FD04 in the race as the F5's monocoque was damaged in the accident. Baldwin then left the team for personal reasons, moving to Van Diemen where he would design a long series of excellent Formula Ford cars. In his absence, the Fittipaldi F5's performances slipped, the car's rear end handling being held to blame. It only just scraped onto the grid in France, was only 22nd qualifier at Silverstone, and then failed even to qualify in Germany. The handling had not really improved by the time of the Dutch GP, but Emerson went very well in the race and had climbed all the way up to fourth place by the finish. This was no new dawn for the F5: it still didn't handle properly, it was slow in a straight line and at Monza it added a fuel pick-up problem to the list, leaving a disgusted Emerson unable to qualify. Fewer teams made the trip to North America for the last two races of the season so Emerson was not at risk of failing to qualify, but it was a poor end to the season, only three points have been gained during the F5's career. The team decided to skip the Japanese GP to focus on building new cars for 1978.

New Fittipaldi F5As were built for 1978, with one of the F5 monocoques being consumed in the construction of the first F5A and the other is believed to have been used to construct one of the later cars.