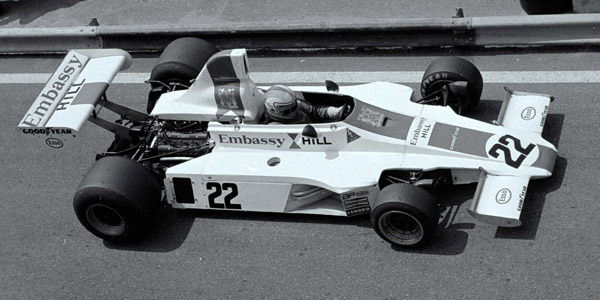 The Hill GH1 was designed by Lola employee Andy Smallman and built by Graham Hill Racing. It was named the Lola T371 before Hill's amicable split with Lola in April 1975.

The Hill team's 1975 car was a development of Eric Broadley's Lola T370, but Andy Smallman had an entirely new monocoque and revised front and rear suspension. Ancillary equipment had been repositioned and some weight saved, but the most obvious outward change was the the tub sides were angled slightly. Rolf Stommelen gave the "T371" its debut at the South African GP, and went well in midfield. The German set fastest time in the second wet practice session at Brands Hatch for the Race of Champions, and although that performance did not translate into the dry race, it showed the car had promised. Hill himself drove the second car, now called the Hill GH1, at the International Trophy, but was well down the grid. Fatefully, the car had a rear wing support made from a new and still little-understood material, carbon fibre. The disastrous Spanish GP at Montjuich Park was next, and after the mechanics had join in the effort ot make the track's Armco barriers, Stommelen qualified ninth and was fourth at the end of the first lap, benefitting from the multiple accidents, and actually held the lead for eight laps until the carbon rear wing supports broke and Stommelen crashed catastrophically, killing five spectators and suffering major injuries.

Team principal Graham Hill to the seat for one more race, at Monaco, but could not qualify, and the brilliant youngster Tony Brise was lured away from Frank Williams' team to take his place. Until Stommelen was fit, Alan Jones drove the other car. Brise was a revelation, qualifying seventh in Belgium, overtaking Emerson Fittipaldi for fifth place in Sweden, and setting third fastest time in the Saturday morning session at the Dutch GP, but the only end result at any race was Brise's sixth place in Sweden and Jones' fifth at the Nürburgring, where Brise wrote off his car during the race. Stommelen returned for the Austrian GP but was still not fit, and Brise continued to star for the team, qualifying sixth for the Italian GP. Brise was the team's only driver for the US GP, so he had the two surviving GH1s to choose from.

Brise was re-signed for the 1976 season, and much was expected from Smallman's all new Hill GH2 design. Tragically, Hill, Brise, Smallman, team manager Ray Brimble, and mechanics Tony Alcock and Terry Richards were all killed in a light aircraft accident at the end of November, and the team folded shortly afterwards.

The two Hill GH1s were retained by the Hill family until the late 1980s where the complete GH1/4 was offered at auction as part of the family's collection of Graham's cars, and the less-complete GH1/3 was sold privately. Both cars were with the same dealer in California in the early 1990s, after which GH1/4 was bought by an Italian and lightly restored to run at the Monaco historics, and GH1/3 was significantly rebuilt in California for a more sustained career in historic racing.