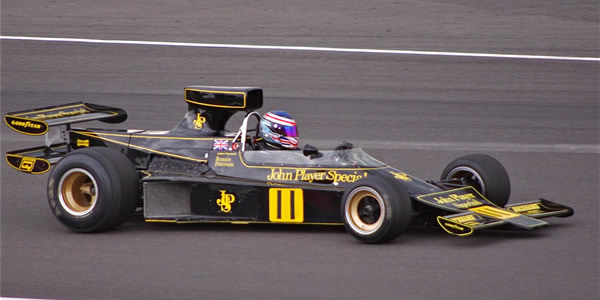 Andrew Beaumont in his Lotus 76 at the 2011 Silverstone Classic. Licenced by David Merrett under Creative Commons licence Attribution 2.0 Generic (CC BY 2.0). Original image has been cropped.

Lotus's attempt to replace the highly successful Lotus 72 with a newer, lighter Lotus 76 in 1974 proved a failure.

Despite the age of the Lotus 72 design by 1973, it remained highly competitive so Lotus boss Colin Chapman set his newly-recruited chief designer Ralph Bellamy the task of creating a new car for 1974 that was the same as the 72, but with an updated and lighter monocoque, or as Bellamy later remembered it, "exactly like the 72 except better engineered". The new car had a shallow, subtly wedge-shaped tub, with the radiators flush to the sides of the engine instead of in separate sidepods as on the 72. It retained the 72's torsion-bar suspension, with rising-rate geometry at the front. A biplane rear wing was quickly dropped, and the main change was a four-pedal system to allow left-foot braking, with an experimental Automotive Products automatic clutch release, operated by a button on the gear lever. The two cars were called JPS/9 and JPS/10, following on from the latest Lotus 72 which was chassis 72/8, then wearing chassis plate JPS/8. However, Autosport noted of JPS/10 that "in 10 years' time historians will call it Lotus 76/2". We take that advice here.

After extensive testing in England, the cars first raced at the South African GP, but the electric clutch system installed on Ronnie Peterson's 76/1 had innumerable problems, and Jacky Ickx was experiencing extreme oversteer in 76/2. Both drivers qualified well down the grid and both retired early, Peterson after his throttle jammed, and Ickx after brake problems. With conventional clutch and pedals, Peterson only had the car's appalling handling to test him at the Daily Express Trophy, and put 76/1 on the front row. He led the race until he was famously passed by James Hunt in the Hesketh 308 at Woodcote, after which 76's engine seized. Peterson qualified on the front row at the Spanish GP and led the wet race until the cars stopped for dry tyres. A few laps later, he stopped with overheating problems, just a few laps before Ickx retired with brake problems. The 76s were dropped completely for the Monaco Grand Prix, which Peterson won using his old Lotus 72. Thereafter, both drivers returned to their 72s while the team tried to sort out the 76's problems away from the Grand Prix weekends. Peterson damaged 76/1 - and himself - when doing brake testing at Zandvoort just after the Swedish GP. At the French GP, Peterson again had the choice of his regular Lotus 72 and the new 76, and again chose the 72, and again won the race. The 76 was unused at the British GP but Petersen then wrecked his regular 72 in practice at the Nürburgring and had to race the spare 76 with the whole rear end of the 72 grafted on. This lash up was still 2 to 3 seconds slower than the Lotus 72, although Peterson was able to drag it up to fourth place by the end of the race. Both 76s had the 72 rear for the Austrian GP, and Ickx chose to race his. Even in revised form, the 76 still suffered from incurable understeer, and Peterson did not trust its brakes. The first car was kept on as a spare, and Tim Schenken raced it at Watkins Glen, where he was only able to qualify as an alternate, and was disqualified when he started regardless.

The Lotus 76s were not seen at an F1 race again after 1974, and the team built another 72E to keep them going through 1975 until the new Lotus 77 was ready. Ralph Bellamy's recollection of the Lotus 76 is that "it was a very, very good car" but it was not ready in time for early-season Goodyear tyre testing and Goodyear developed their tyres for 1974 around the McLaren M23. As a result, he says, "the front tyres were entirely unsuited to the inboard brakes, not putting any heat into the front wheels", a problem that continued for Lotus until the Lotus 77 was converted to outboard front brakes.

In 1976, David Render was loaned Lotus 76/2 to use in the British Sprint Championship, and he won four rounds of the series. He retained the car for 1977, but it then returned to Hethel until it was sold to Bobby Howlings at the end of 1986. It has only raced rarely and returned to England in 2017 after a long residency in the Musee du Circuit de Spa-Francorchamps at Stavelot in Belgium. The other car, 76/1, was retained by the Chapman family until it was sold to an American collector in 2002 and appeared at that year's Goodwood Festival of Speed before becoming a regular runner in historic racing.