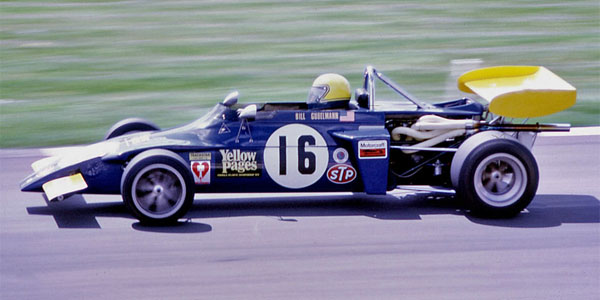 Bill Gubelmann in his March 722 at the BOAC 1000 km support race at Brands Hatch in April 1972. Copyright Gerald Swan 2017. Used with permission.

March's Formula Atlantic car for 1972 was called the March 722, the same name as the Formula 2 and Formula B models. Five cars are known to have been built to this specification.

The various versions of the March 722 and the Formula 3 March 723 were all broadly the same, utilising a bathtub monocoque built from 16-gauge and 18-gauge L72 aluminium alloy. The F3 car used a Hewland Mk 8 gearbox, which required a reversed lower wishbone in the rear suspension, while the 722 used a Hewland FT200. The front of the monocoque was lower than on the 712M and 713M, to allow for the lower nose. At the back of the monocoque, a tubular subframe carried the engine and rear suspension. The car's main radiators had been moved from the nose to sit either side of the driver's shoulders, just as on the rival Brabham BT38. Suspension was outboard all round, with relatively narrow front wishbones, at least when compared with the Brabham. The general outline of the monocoque was the same as the successful 712M, but in an aid to maintenance, the panels at the back of the 722's sidepods could be unbolted for easy installation of the fuel cells. This was a feature on all March monocoques from the 722 onwards, but real 712Ms did not have that feature, so it was a good way to tell real 712Ms in historic racing in the 1980s. Some of those "712Ms" were built using tubs from as late as 1975!

Max Mosley did not originally intend a Formula Atlantic version of the 722, as the only difference from F2 specification would be the lack of ventilated front brake discs and seat tank, which would only drop the price by £200 and thus make the car too expensive for Formula Atlantic. However, when Cyd Williams tested a car using Graham Eden's 1600cc BDA engine and equalled the lap record at Silverstone, this policy was reversed. The first to appear were for American Bill Gubelmann, whose car was probably ordered as a Formula B, northern English club racer Johnny Calvert, and Australian Vern Schuppan, whose car was quickly whisked away for two races in South East Asia before returning to Britain. Two more 722s were built for the Graham Eden Racing pairing of Chris Oates and Cyd Williams, replacing the planned Ensigns that Eden had on order. The March 722 was the dominant car of the British season, with Gubelmann, Williams and Schuppan winning 16 out of the 25 races. Williams won eight races to Gubelmann's six, but the American narrowly took the title.

In August, Vern Schuppan's car was modified to use bodywork designed by Dennis Falconer, who had already provided effective but controversial bodywork for the Eldens of the Ippokampos Formula Ford team driven by Johnny Gerber to win the 1972 World Cup Formula Ford Festival. Falconer's March 722 bodywork involved a front radiator housed in a full-width nose, following the fashion for short stubby full-width noses and front radiators that had earlier been adopted by Palliser for Schuppan's championship-leading Formula Atlantic car in mid-1971. When March adopted the same shape and layout for its 1973 range, Falconer bodywork became a popular option for updating 712Ms and 722s. Falconer later produced bodywork for Brabham's BT40 and BT41 cars. 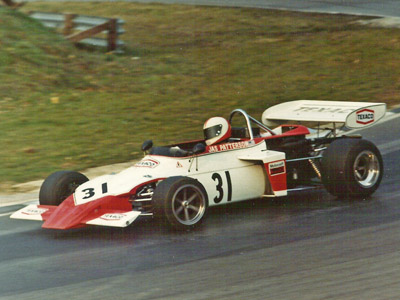 New to Bill Gubelmann (Oyster Bay, NY) to use in the 1972 Yellow Pages Formula Atlantic championship. The car was blue and yellow, and wore #16 all season. Gubelmann won six races and narrowly pipped Cyd Williams to the championship title. The car was sold to fellow American Jas Patterson (Rosslyn Heights, NY) for 1973, repainted red and white, and entered for him by Texaco Team Racing/RIR in the 1973 British season. Patterson crashed heavily at Oulton Park in May 1973, and although the car was rebuilt, he appeared a few races later in what appears to be a new 73B. Patterson raced the 73B for the remainder of 1973 and through 1974, but the 722 reappeared in early November 1974 when an ex-Patterson "722/73B" was acquired by Roy Baker (Ferndown, Dorset) and raced regularly by him through the 1975 season. Subsequent history unknown.

New to John Calvert (Seaham, County Durham), and raced in Formula Atlantic and libre racing in 1972. The car regularly wore #77, and was described as white or blue. Sold to Mike Mather (St Helens, Merseyside) and used by him, and once by brother Kim Mather, in Formula Atlantic and libre in early 1973. Sold to John Kitchen in mid-season, and used by him in sprints and hillclimbs in late 1973, 1974, 1975 and early 1976, using a BDA engine. Then to Peter Riley (Crosby, Liverpool), again for sprints and hillclimbs. At first it was said to have a Cosworth FVA engine, but it had a Richardson BDA in 1977. Riley was still using the 722 in speed events as late as 1984. According to speed event historian Steve Wilkinson, Riley retained the car, complete but dismantled, and stored in his garage. Riley died in 2011, and the car passed to Paul Gardner and Alan Newton, and Gardner started the restoration. When Newton died, the car was sold to Chris Simpson in 2014, but he did not use it. It went to Ashley Hodge in 2016, and then to Daniel Clayfield in 2017.

New to Chris Oates (Kimberley, Notts) and entered by Alida Graham Eden Racing in a couple of Formula Atlantic races in April 1972, but Oates was well off the pace and the car was not seen again until January 1973, when it had been acquired by Baron Robertson in New Zealand, and fitted with a Cosworth FVC for the 1973 Tasman series. It was dreadfully slow, and Robertson traded it to Max Stewart for his Elfin MR5. Stewart entered the March-FVC for John Leffler in the Australian rounds of the 1974 Tasman series. Then fitted with a Ford twin cam engine for Stewart to drive in the Australian F2 races later in 1974. It was later acquired by Paul Feltham, a high-profile Australian Rules Football player who was attempting to break into motor racing, and raced by him at Hume Weir in March 1975. This car remains in Australia. 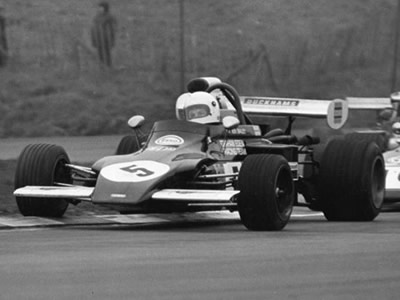 Ken Bailey in his March 722 in 1973, in its original form as he bought it from Graham Eden. Copyright David Bailey 2020. Used with permission. 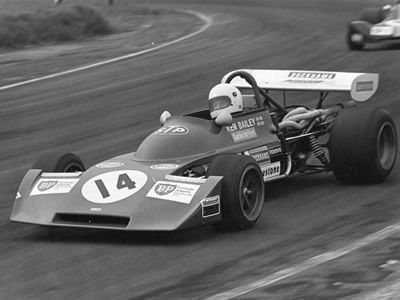 Ken Bailey in his Falconer-bodied March 722 in 1973. Copyright David Bailey 2020. Used with permission.

New to Graham Eden Racing in April 1972 for Cyd Williams (Sandbach, Cheshire) to drive in British Formula Atlantic. It replaced the Chevron B18 which had taken Williams to two wins earlier in the season. Once he had the car to his liking, Williams won six out of the next nine races, but narrowly lost the championship to Bill Gubelmann. Run by Graham Eden Racing for Ken Bailey (Stretford, Greater Manchester) in 1973, and fitted with Falconer bodywork in May. The car was sold to Philip Dowell (Ombersley, Worcestershire) for 1974, but during pre-season testing at Silverstone, he hit the bank heavily at Woodcote corner and died later in hospital. It is assumed that the March was destroyed in the accident. 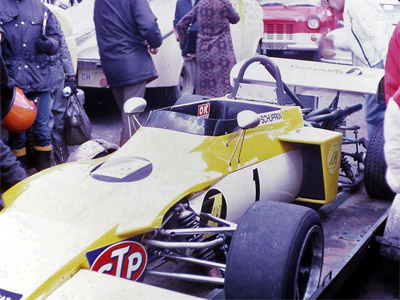 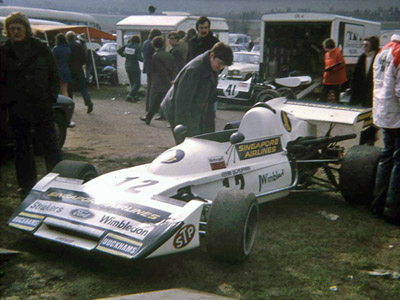 Vern Schuppan in his Falconer-bodied March 722 at Mallory Park in 1973. Copyright Stuart Dent 2006. Used with permission.

New to Australian Vern Schuppan to drive in the British Formula Atlantic championship. Fitted with a BRM Ford twin cam engine, and first seen in practice at Mallory Park in late March, but Schuppan left before the race to catch a flight to the Singapore GP. Schuppan finished second in Singapore, and third in the Malaysian GP a week later. Then returned to the British series, now with a BDA, and won four rounds. The car was then fitted with Falconer bodywork and an Amon-Woods engine rebuilt by Geoff Richardson, and raced in the Rothmans 50,000 and in two late-season F2 races. After a single F2 race in 1973 fitted with a Richardon BDG, the car went to Southeast Asia, winning the Singapore GP with a Ford twin cam fitted, then competed in the JAF Grand Prix at Fuji with the BDG, and back to the 'twink' for Macau. He raced the car in British Formula Atlantic briefly in early 1974, then sent it back to Asia where he won the Macau GP in November, by which time it had been fitted with 732 bodywork and a Lola T360 rear wing. It then became a fixture at Macau up to 1977, being driven by Alan Jones and Derek Daly. Patrick Tambay also raced for Theodore Racing in the Malaysian and Penang Grands Prix in 1977, where it was still in 732 form but was billed as a 752. It reappeared at Macau for Schuppan in 1979, now in 76B bodywork. After one more race in the hands of Roberto Moreno, the car was retained by Yip and placed in the Macau Grand Prix Museum. Still on display in the museum in May 2017.

Of the five cars built specifically for Formula Atlantic, Bill Gubelmann's 722/24 was sold to fellow American Jas Patterson and updated to 73B specification; John Calvert's 722/29 had gone hillclimbing by the end of 1973; Chris Oates 722/37 was sold to New Zealand; Cyd Williams' 722/39 was rebuilt with Falconer bodywork for Ken Bailey for 1973; and Vern Schuppan's 722/40 was transferred to Teddy Yip's ownerrship and raced in South East Asia for many more seasons.

At the beginning of 1974, Jas Patterson still had his ex-Bill Gubelmann 722/24 although he was by now racing a March 73B; the ex-John Calvert 722/29 was being used in sprints in the Lancashire area by John Kitchen, the ex-Chris Oates 722/37 was in New Zealand; the ex-Cyd Williams/Ken Bailey 722/39 was wrecked in Philip Dowell's fatal accident in February 1974; and Teddy Yip's ex-Vern Schuppan's 722/40 was busy in South East Asia.

By 1975, there were only two intact Formula Atlantic March 722s left in England: the ex-Bill Gubelmann/Jas Patterson 722/24 now in the hands of Roy Baker in southwest England; and the former John Calvert/Mike Mather/John Kitchen car that rarely strayed from Lancashire. Baker's is unknown after 1975, but may have found its way into sprints and hillclimbs in that part of England. The Kitchen car went to Peter Riley and was hillclimbed by him well into the mid-1980s.

Thanks to Chris Townsend for his work, both on the Formula Atlantic results on OldRacingCars.com and for his work keeping track of the Formula Atlantic March 722s. We are grateful to Adam Ferrington and Bryan Miller for information from their archives, to Gerald Swan, Richard Bunyan, Peter Townsend and Stuart Dent for their photographs, and to Simon Hadfield for technical details of the early March production cars. Thanks also to current owner Daniel Clayfield for filling the gaps on his car.