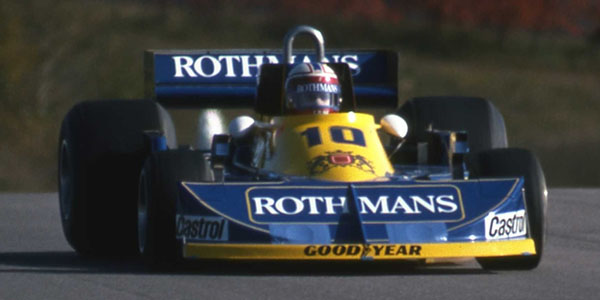 The March 771 was introduced in June 1977 for Ian Scheckter, but quickly dropped and only reappeared after his 761B was damaged. It later had success in six-wheel form as a hillclimb car.

When the new March 771 was announced in May 1977, the first impression was that it was little changed from the March 761B, except that it now had a nose radiator. However, there were bigger changes under the skin, with a completely revised monocoque which moved the driver several inches further forward to allow for a fuel tank behind the seat. The bulkheads and suspension mountings were all new, but the basic geometry was unchanged. The large side radiators had given way to smaller oil coolers, with space for additional fuel cells near the back of the sidepods, giving a much improved weight distribution. As lead driver Ian Scheckter had injured a rib at Monte Carlo, first tests at Zolder were conducted by Bruno Giacomelli, and as it was his first experience of a F1 car, results were inconclusive. Scheckter used the car in practice at the Belgian GP, but it was quickly put aside. As it needed more testing, it was not taken to the Swedish GP, and subsequent private testing at Dijon showed it to be slower than the 761B. It also missed the British GP, where Scheckter let slip that it was being returned to side radiators, and the races in Germany and Austria, where Scheckter's attempts to wring speed from the 761B were positively heroic - until he went off at the Hella Licht corner. With the 761B deemed irreparable, Scheckter was allocated the second 771 for the Dutch GP, but this car looked just like a 761B. Scheckter drove it just three times before writing it off at Watkins Glen when he skated off at the chicane and beat the poor car to death with the catch fencing posts. The original 771/1 was flown out for the Canadian GP, and also taken to Japan, where Scheckter was not able to practice it due to visa problems.

March pulled out of F1 in 1978, selling their F1 operation to Gunther Schmid's ATS team, and Max Mosley left the company to work for F1CA as legal advisor, leaving Robin Herd as Managing Director. The remaining staff of 65 based in Bicester concentrated on their very successful F2, F3 and Formula Atlantic markets. The remaining 771 sat at the factory through that season, but was then acquired by hillclimber Roy Lane, who was attracted to the idea of using March's "2-4-0" six-wheel project on the hills. The 2-4-0 rear end had been used on 761s and 761Bs during testing, and now the Mk 2 version of the transmission was attached to the 771. Lane was very successful at the start of the 1979 season, especially in the wet where the four rear wheels helped the car to get its power down, and he won the opening RAC round at Wiscombe Park and two early-season BARC rounds. However, after missing the Top 10 at Shelsley Walsh in June, he returned the car to its normal four-wheel specification for the rest of the season. Lane built up the 782-based "79S" for 1980, and the 771 was sold off via the dealer network to a collector in the northwest. He later acquired the 2-4-0 rear end from Lane, and built a six-wheel show car. By 1991, it was in need of refurbishment, and the owner's chosen restorer sent off the tub for a rebuild. Unfortunately, the restorer then died suddenly, and the tub was never reunited with its owner. A couple of UK restorers then enter the story, and the 771 was built back into a complete car again, and was sold to an Italian customer. It changed hands in Italy in the early 2000s, and was in use as a 751 show car in Italy in 2008. It next moved to another Italian owner, who put it back into 1977 Rothmans livery, and by March 2015 it was offered for sale by a dealer in southern France. It was sold by RM Sotheby's in November 2021 for €314,000; the new owner is not yet known.