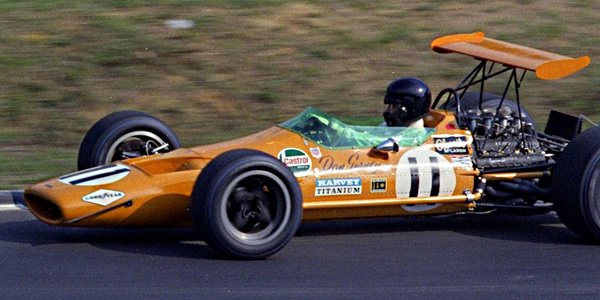 Dan Gurney gave up on his Eagle F1 car after the Italian GP in 1968, and drove this McLaren M7A at the Canadian Grand Prix and two later races. Copyright Norm MacLeod 2017. Used with permission.

Bruce McLaren took the first of the 1968 Formula 1 McLaren M7As to his team's first Grand Prix victory at the 1968 Belgian GP. Denny Hulme took another three GP victories and challenged for the 1968 World Championship.

Robin Herd designed the monocoque of the M7A before he left to join Cosworth, leaving Bruce McLaren to outline the suspension geometry assisted by Gordon Coppuck. The new car defined the early standard form for the Cosworth DFV era: a short bathtub monocoque ending behind the driver's seat comprised of three steel bulkheads, one at the back, one at the front, and one open bulkhead at the dashboard, skinned with aluminium panels to form a full monocoque over the driver's legs. The M7A used glued and riveted skins of L72 aluminium alloy, a British standard for the aviation industry, in a thickness of 20 gauge, equivalent to 0.912mm. The pontoons either side of the driver contained 40 gallons of fuel in FPT bag tanks. The Cosworth DFV engine was bolted directly to the rear bulkhead. Front suspension was outboard, unlike the rocker-arm-actuated inboard springs of the Lotus 49, with the suspension mounted on the front bulkheads, and via radius rods to the dashboard bulkhead. The rear suspension was mounted on the Hewland DG300 gearbox, with radius rods forward to the rear bulkhead. The main radiator was in the nose, with a fibreglass nose section venting air upwards, and the oil radiator was on top of the gearbox. The oil tank was mounted on the side of the gearbox. Autosport's technical editor John Bolster, who was prone to gushing, described the standard of construction and finish as "superb".

The team expanded to two drivers for 1968, with new World Champion Denny Hulme moving from Brabham to join Bruce McLaren. Following Hulme was Phil Kerr, who left Brabham after nine years to become joint managing director of McLaren with Teddy Meyer. The first two M7As were finished in March 1968, and both debuted at the 1968 Race of Champions, where McLaren dominated the race, winning from pole position, with Hulme finishing third. At the next race, the Silverstone International Trophy, Hulme took pole position and won, with Bruce content to take second place. It was not quite so easy at the first GP, the Spanish, but the M7As were third and fourth on the grid and Hulme finished second. After a poor weekend in Monaco, Bruce McLaren took his team's first GP victory in the Belgian GP at Spa in June after Jackie Stewart's Matra MS10 retired on the last lap. Results were mixed over the next few races, but Hulme won in Italy and in Canada to equal Graham Hill's score at the top of the World Championship standings. A crash at Watkins Glen and retirement in Mexico ended his challenge, but had been a wonderful season for McLaren's F1 team.

Hulme's M7As was retained for 1969 for the Kiwi to drive, and the latest car, M7A/3, was modified to M7B specification with pannier tanks. When that did not work, both the M7B and the prototype M7A were sold to privateers; both were crashed later in 1969, and both cars scrapped. Bruce drove a new McLaren M7C for the rest of 1969, and a huge amount of effort was wasted on the four-wheel-drive McLaren M9A. It didn't help that Goodyear, McLaren's tyre supplier, were well behind Firestone and Dunlop until the end of the season, when the latest rubber helped Hulme win the Mexican GP in his well-used sole surviving M7A. That last M7A was bought by Tony Dean for Formula 5000, and was then sold to a French Museum where it remains, the museum owners having turned down all McLaren International's offers for the car.