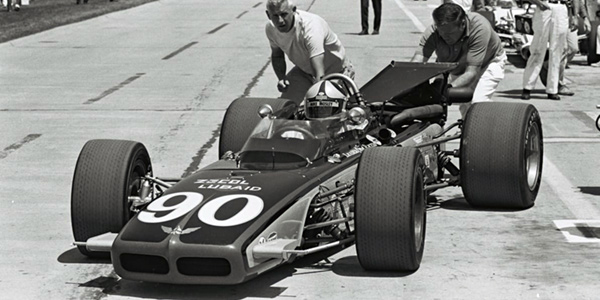 Mike Mosley in the 1969 Watson at the 1969 Indy 500. Part of the Dave Friedman collection. Licenced by The Henry Ford under Creative Commons licence Attribution-NonCommercial-NoDerivs 2.0 Generic. Original image has been cropped.

After copying the Brawner Hawk for his 1967 car, AJ Watson returned to monocoque construction for two very similar cars built in 1968 and 1969.

For the first few races of the 1968 season, George Snider drove for AJ Watson using his Ford-engined 1967 Watson. The new 1968 car with turbo Offy engine arrived at the Indy 500, but Snider was unable to better 160 mph in the car. With his quicker rivals now approaching 170 mph, Watson decided to replace Snider with Chuck Hulse, but the veteran did get into the car until Wednesday 15 May, leaving him little time to acclimatise before the start of qualifying the following Saturday. Leader Card Racers also secured sponsorship for the entry from Bill Trainor's Zecol-Lubaid Products of Milwaukee, producers of an oil additive. After calling off one qualifying attempt on Saturday, Hulse crashed the Watson on Sunday morning, the only damage being to Hulse's pride and "The Pepsi kid" announced his immediate retirement. Watson had to hurry to find another driver, and both Bob Hurt and Johnny Rutherford tried the car on Monday 21 May. Two days later, Mike Mosley was selected, quickly breezed through his refresher test and qualified on the second weekend of qualifying with a speed of 162.499 mph, becoming the youngest driver in the race. Dempsey Wilson was then lined up to drive the #87 1967 car, but the team thought better of that, and he was pulled out of the line. Mosley had a steady run to finish eighth in the race.

Mosley kept the drive for the rest of the season and used the 1968 Watson-Offy at Milwaukee and Langhorne in June, finishing fourth at the Pennsylvania track. After using the 1967 Watson-Ford on the road courses, he returned to the 1968 Watson-Offy for the second visit to Langhorne in July, only to be replaced just before qualifying by Mario Andretti, whose regular car had blown its engine. Andretti dropped out early with a wheel problem, and Mosley took over the repaired car for the second race. He raced the Watson-Offy in the final part of the season, twice being relieved by Leader Card Racers teammate Bobby Unser as he tried to defend his championship points lead. At Michigan, many of the leading runners dropped out early and Mosley was actually leading the race when he was called in to let Unser take over. Unser could not hold on to the lead, but his third-place finish was the best result for a Watson car since 1965. 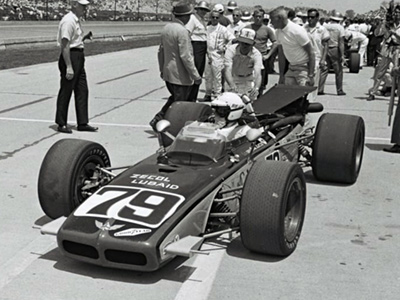 Bob Veith takes the 1968 Watson out for practice at the 1969 Indy 500. Part of the Dave Friedman collection. Licenced by The Henry Ford under Creative Commons licence Attribution-NonCommercial-NoDerivs 2.0 Generic. Original image has been cropped.

A new Watson built with a turbocharged Offy engine for 1968 and entered as the #90 Leader Card Racers car for Mike Mosley. The team also had their older 1967 Ford-engined car during 1968 and this also ran as the #90 on road courses. The 1968 car was also driven by Mario Andretti at Langhorne in July 1968 after the Italian's car blew a rod during his practice run. Retained into 1969 but Mosley also had a new 1969 Watson during practice for the Indy 500, eventually racing the newer car. Bob Veith was given the chance to qualify the 1968 car but crashed. The 1968 car was then entered as #91 later in the season for George Snider and once for Johnny Rutherford. It was Mosley's car at Riverside in November. After 1969, the two monocoque Watsons were rarely seen, the '68 car only appearing for Mosley at Milwaukee in August 1970, for Snider at Trenton in October, and finally for Bill Puterbaugh at Pocono in 1971. History then unknown until it was found in very dilapidated condition in an old barn in Manteca, California by Toney Edwards (Greenwood, Indiana) some time around 2018. Still with Toney in September 2021. 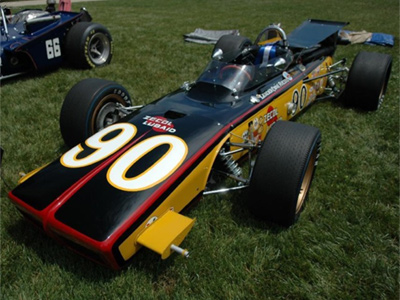 AJ Watson built a new car for the Leader Card team in 1969 which was Mike Mosley's #90 Zecol-Lubaid ride at the Indy 500 that year. He raced it at Milwaukee and Langhorne in June, and it is then believed to have been his #90 car for much of the rest of the season, but photographs are slowly clarifying that. In 1970, it was entered for Bob Veith as the #90 G. C. Murphy car but he hit the wall during practice and damaged the car. There is no definite sighting of the car after that; it may have been the #90 car raced by George Snider at Michigan and Indianapolis Raceway Park but as he only completed one lap over the two races, photographs are proving hard to find. Subsequent history unknown but later to the collection of Bob McConnell (Urbana, OH) and restored for him by Walter Goodwin. Still in the McConnell collection in October 2021.

A new car was built for 1969, to a very similar pattern, and made its first appearance at the Indy 500 where Mosley used both cars, the new one wearing #90 and the old one wearing #79 after confusingly also wearing #90 for the first few days of practice. Mosley set good times in both cars, quickly exceeding 165 mph in the newer car, and then reaching 167.4 mph in the almost identical #79, the ninth quickest time to that point. After Mosley qualified the 1969 car safely in 18th place, Bob Veith was given the chance to qualify the 1968 car, but brushed the wall and ran out of time to get a qualifying run recorded in the repaired car. For the rest of the season, the three 1967, 1968 and 1969 Watsons were all used, swapped around to a degree yet to be fully unpicked. Mosley was the lead driver with Snider driving a second car at some races. Mosley's third-place finish at Trenton Speedway in July was the best result of another disappointing season.

For 1970, a 1968 Eagle was also added to the stable, inherited from Bobby Unser's half of the operation, and all four cars were again used by Mosley and Snider during the season. In 1971, AJ Watson inherited the other two Eagles from Unser's team, as Unser had now left Leader Card, and Watson fielded those cars for Mosley and Snider, with one of the old Watsons only appearing once.

My thanks to Simmo Iskül and 'gbl' for their hard work and remarkable eye for detail working through photographs and other evidence to untangle the histories of these cars, and to Bob McConnell and Toney Edwards for information on their cars. Thanks also to Dan Vaughan of Conceptcarz.com for the use of one of his pictures.