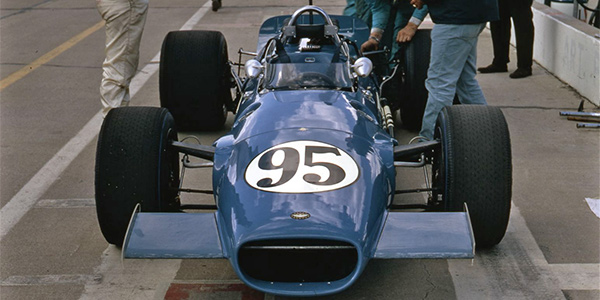 Jack Brabham returned to Indianapolis with a pair of new Brabham BT25 Indy cars in 1968. Repco's quad-cam V8 engine could not compete at the Indy 500, but Peter Revson later demonstrated the car's effectiveness with a win at Indianapolis Raceway Park.

Since Ron Taurananc's previous Indy racing design, the 1964 Brabham BT12, USAC rules had mandated bag tanks, so Tauranac was unable to produce a simple derivative of his BT24 F1 design. Instead he opted for a monocoque, the first he had designed, and moved even further out of his comfort zone by using inboard front suspension with Lotus-style rocker arms. Repco produced a 4.2-litre four-valve twin-cam Type 760 V8 engine for the car which was said to give over 500 bhp at 8500 rpm. A turbocharged engine was also said to be under development.

The main focus at the Speedway for the 1968 Indy 500 was getting Jochen Rindt's car into the race. Jack Brabham drove both Rindt's #35 BT25 and the backup #95 car in practice but had no intention of racing and Masten Gregory was lined up to drive the second car. Rindt was easily able to qualify but his speed of 164.144 mph was well off Joe Leonard's pole speed of 171.6 mph in the Lotus 56 turbine and also disappointingly far behind the quickest conventional car, Bobby Unser's turbo Offy Eagle at 169.5 mph. The second BT25 did not arrive at the Speedway until 19 May and did not turn its first laps until 22 May, just a couple of days before the final qualifying weekend, so no attempt was made to qualify it. When Rindt retired from the race after just five laps, the team had little to show for its investment.

Once the European F1 season was over, Jack Brabham returned to the US to drive Rindt's BT25 at the Riverside USAC race on 1 December. Despite arriving late for practice and then experiencing problems with the Repco's fuel injection, he qualified in an excellent sixth place. Early in the race, Brabham spun and dislodged his nose cone, eventually retiring with an oil leak. The team returned to Indy in 1969 with Peter Revson down to drive the ex-Rindt car and Jack himself entered in the unraced second car. The idea of a turbocharged Repco engine had been dropped leaving the team doubly handicapped, as the normally-aspirated Repco was both less powerful than the venerable Offenhauser engine, but was also thirstier, requiring the Brabhams to stop more often during the race. Both drivers scraped onto the back of the grid, Revson being slowest of all, and although Jack was again an early retirement with another oil leak, Revson went very well in the race to finish in fifth place. The New Yorker was then given the chance to drive Jack's car in the twin Indy races at Indianapolis Raceway Park in late July and shocked the Indy establishment by qualifying fourth, finishing third in the first race and then winning the second race. Jack Brabham, recovering from a testing accident in his F1 Brabham BT26A, saluted Gregory's win from the pits with his crutch.

Brabham built a new car for 1970, the Brabham BT32, using the turbo Offy engine, and the ex-Revson BT25 was kept as a backup that season before being sold to John Martin, who raced it occasionally over the next couple of seasons. 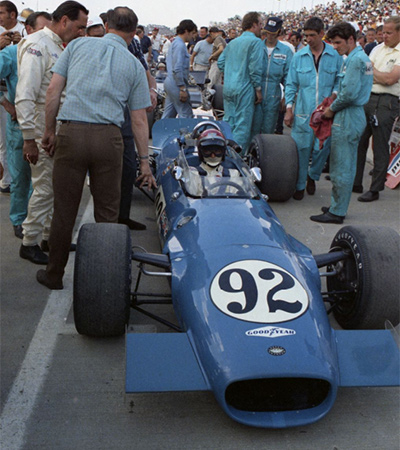 Jochen Rindt's #35 Brabham was an early retirement from the 1968 Indy 500 and was then used by Jack Brabham at the Riverside race in December 1968. It reappeared only once more, as the #92 car for Peter Revson at the 1969 Indy 500. After the race, it was damaged during a technical inspection which resulted in the fuel tank being blown out of the car. It was returned to England for repairs but, after it had been reskinned, was no longer needed and was retired. Two years later, the car was found, still disassembled, in Chessington by Doug Nye and acquired on behalf of Tom Wheatcroft's Donington Museum. It was restored to 1968 specification in the museum's workshops with Ron Tauranac's help and has been on display since 1973. The car remained on display in the museum in 2011, and was then sold to Joe Willenpart (Austria) c2012. It was still in the Willenpart Collection in April 2014. Following Willenpart's death, the car was sold to a private collection. 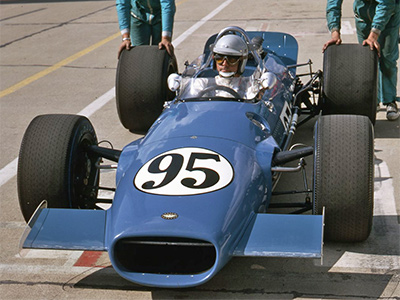 Masten Gregory's #95 Brabham did not qualify for the 1968 Indy 500 but was qualified for the 1969 race by Jack Brabham. Peter Revson then used it to win the IRP race in July 1969 and it was retained as an unused spare for the 1970 "500" after which it was sold to John Martin. Martin raced it in 1971 and 1972 before acquiring a newer McLaren M16. The car's last race was when leased to Bill Simpson for the race at Ontario Motor Speedway in March 1974 and was then retained by Martin until he restored it in the early 1990s. In 1993, hearing of the restoration, Simpson bought the car and it was displayed at Simpson World in North Carolina until bought by Aaron Lewis (Cessnock, NSW, Australia) in April 2008. In 2014, or shortly afterwards, Lewis sold the car to the ROFGO Collection.

Chassis numbers were not reported for these two cars, so the identities of the cars are based on the assumption that the first car to arrive at the Speedway in 1968 was the prototype, which would be chassis BT25/1 if it followed standard Brabham practice, and the second was chassis BT25/2. The Hungness Yearbook for 1969 then gives the information that Revson drove Rindt’s 1968 car and Jack Brabham drove the car that had been intended for Gregory in 1968. The provenance of each car is then straightforward, but this was backed up by examination of the rivet patterns on the side of each car, which are subtly different. The author was commissioned in 2011 to establish the identities of the two cars and pictures of the cars taken at that time were compared with detailed pictures from 1969 and showed clearly that the Donington Museum's car was the Rindt/Revson car and that the car then owned by Aaron Lewis was the sister car. Repairs to the Donington car from when its fuel tank was damaged reinforced the identification.

My thanks to Aaron Lewis and Bill Harding for their help during the 2011 investigation, and to Doug Nye for his account of the discovery of the Donington Museum's car. Written sources used include a "Driver’s Angle" feature on Jochen Rindt (Speedworld International 18 May 1968 p13), Autosport's Riverside Rex Mays 300 report (Autosport 13 Dec 1968 pp12-14), Autosport's 1969 Indy 500 report (Autosport 6 Jun 1969 p25) and "Brabham-Ralt-Honda - the Ron Tauranac Story" (Mike Lawrence, 1999).