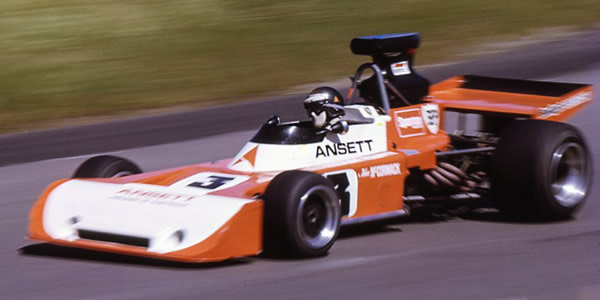 Garrie Cooper's Elfin Sports Cars is one of the great successes of Australian motor racing history. After a series of specials in the late 1950s and then a highly successful range of sport-racing 'Elfin Streamliners' starting in 1960, Cooper designed and built his first Formula Junior in 1961. This was followed by a first monocoque in 1964, built for the new Australian 1.5-litre racing category, and then the classic Elfin 600 in 1968. Elfin 600s won the Australian 1.5-litre and F2 Championship in 1968, 1971 and 1972 as well as Formula Ford titles in 1970 and 1971.

Cooper entered F5000 in 1971 with the Elfin MR5 and John McCormack won the Australian Gold Star in 1973 with his sister car. He followed this with a second title in 1975, this time driving the one-off MR6. The MR8 followed in 1976 but F5000 was starting to stagnate and it was three years before Larry Perkins won Elfin's next major honours, the 1979 Rothmans International Series.

The final Elfin, and indeed the final F5000 car, was the ground-effect MR9 but by the time it was sorted, F5000 had less than a year to live. So, unfortunately, did Garrie Cooper, who died suddenly in April 1982. The MR9 joined the other exhibits in the Birdwood Mill Museum.

Sources used for this page include Australia's Elfin Sports and Racing Cars by John Blanden and Barry Catford (1997).