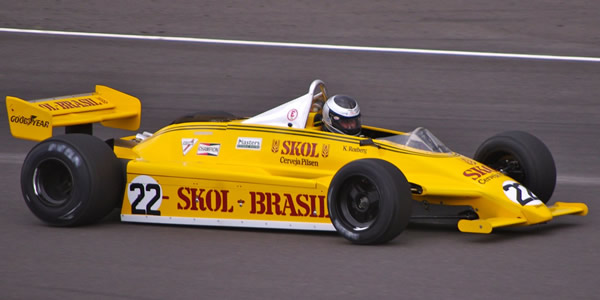 Alain Plasch in a restored Fittipaldi F8C at the Silverstone Classic in 2011. Licenced by David Merrett under Creative Commons licence Attribution 2.0 Generic (CC BY 2.0). Original image has been cropped.

Harvey Postlethwaite's 1980 Fittipaldi F8 design was finally ready in time for the British GP in July, and was used until the end of the season. An extensively revised car, the F8C, was produced for 1981, and an F8D was used alongside the F9 in 1982.

Fittipaldi Automotive had bought the assets of the Wolf team for 1980, and initially used Harvey Postlethwaite's Wolf WR7/WR8/WR9 cars, updated and renamed Fittipaldi F7s. A new Postlethwaite design was originally intended to be ready for the Belgian GP but it was delayed until early July. The car was an evolution of the Wolf design, using the same full honeycomb monocoque that Postlethwaite had pioneered in 1979. In other respects the F8 was highly conventional, following the shape of the Williams FW07, Brabham BT49 and Arrows A3. Like almost all F1 cars of that era, it employed inboard front suspension with rocker arms, had outboard brakes both front and rear, and used a single pillar (centre post) rear wing. Team boss and lead driver Emerson Fittipaldi shook down F8/1 at Snetterton and Donington prior to driving it at the British GP. Keke Rosberg received F8/2 at the German GP but the drivers then swapped cars for the next race. The F8 was a huge improvement on the F7, and Rosberg had a storming drive from last place to finish fifth at Monza.

A heavily revised car, the F8C, was produced for 1981. Although largely the same shape as the F8, the F8Cs were said to have nothing interchangeable, having a stronger monocoque, revised front suspension, and new bodywork and aerodynamics. Pictures show that the fabrication of the monocoque was significantly different, the honeycomb being much better detailed than on the first F8s. However, the team slipped back down the grid in 1981, with Keke Rosberg - who would be World Champion just one year later - failing to qualify five times, and poor Chico Serra, who had replaced the retired Emerson Fittipaldi, having a dreadful season. Serra stayed at Fittipaldi for 1982 and used a new F8D in the early races, before the F9 was completed. Rosberg moved to Williams for 1982 and would become Drivers Champion. Postlethwaite moved to Ferrari where he would design the 126C2, which won the Constructors Championship.

Of the five cars built, F8/2 was sold off for the British F1 series, and after many years in a Hollywood Movie Museum in Belgium, is now in a private collection. The two F8Cs were acquired by ADA Engineering; one of these has been used extensively in historic racing while the other has been a long-term museum exhibit. The 1982 F8D was written off which leaves just F8/1 to be resolved, a car that oddly disappeared at the end of 1980 just three races after having been rebuilt on a new monocoque. There are a number of possibilities for this 'missing' car: one is that the team regarded it as F8/3 but used the carnet from the wrecked F8/1 for the final races of the 1980 season, before giving its true identity as F8C/3 in 1981. The second possibility is that it is the car now in a museum in Turkey, but people who have examined that car believe it is an older tub. The third possiblity is that it went to South Africa as a show car and was then the tub built up into a complete car in Italy in 2018. However, this Italian tub lacks some of the witness marks that should be visible on F8/1. More evidence is required to solve this problem.