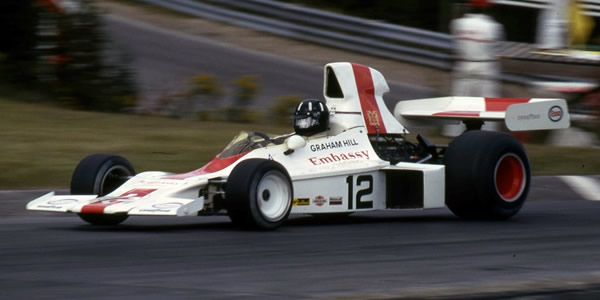 Graham Hill in the Embassy Shadow DN1 at the Canadian GP in 1973. Copyright Norm MacLeod 2016. Used with permission.

The UOP Shadow Racing Team first appeared at the South African GP, but the DN1 was Southgate's first Cosworth DFV design, and was caught out by vibration issues. Graham Hill bought a customer car, but all three DN1s spent most of the season at the back of the grid. The car's only moment of glory was in the wet race in Canada, where Oliver briefly led and was classified third.

Four of the six cars built survived the season. Of the three works cars, one raced in the Shellsport G8 series, another went to a driver in lieu of salary, and a third was retained by Don Nichols for many years.

Click on a car below to see its full race history. The present location is shown where recorded; full details of ownership are held on file but not all of this information can presently be disclosed.

Graham Hill had been team leader for the Brabham F1 team in 1971 and 1972, but a lack of success led to his departure. He had also been racing in F2, in 1971 with Rondel and then in 1972 with Kaydon Racing, sponsored by Jägermeister, in 1972. This led him to create his own team in 1973, with backing from the W.D. & H.O. Wills tobacco company through its brand of Embassy cigarettes. He bought a Shadow DN1 for his first season, but the car was built at John Thompson's workshop in Northampton, not at the nearby Shadow factory. It was maintained at Maurice Gomm's premises at Old Woking. Hill struggled with the DN1 even more than the works drivers, so commissioned Lola to build a new F1 car for 1974, the Lola T370.