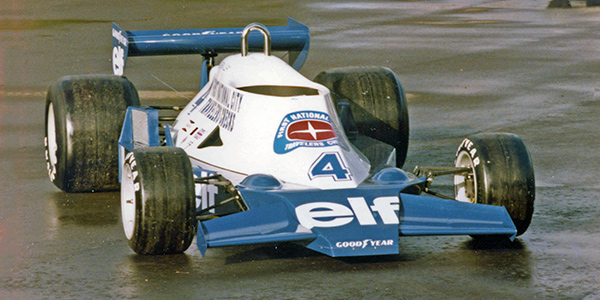 Maurice Philippe took over as chief designer at Tyrrell for 1978, and produced the tidy and extremely orthodox Tyrrell 008. Patrick Depailler won the Monaco GP in an 008, but it was not competitive against the new ground-effect cars.

Maurice Philippe had worked with Colin Chapman at Lotus on the Lotus 56 Indycar and the Lotus 72 F1 car, two cars that had revolutionised F1 design. He had then moved to the Parnelli Indycar team and had produced their 1972 and 1973 Indycars, before designing the VPJ4 F1 car in 1974. He joined Tyrrell in 1977 after two years freelancing, including a spell at Fittipaldi. The six-wheel Tyrrell P34 had proved a dead end during 1977, so a fresh start was needed for 1978. The return to four wheels for the 008 was expected of course, and the 008 also differed from the P34 by being very lightweight. The monocoque of the car was exceedingly shallow, reminiscent to some of the Hesketh 308C of 1975. The front suspension returned to the pushrod-actuated inboard springs of the 007, as the new car's chisel nose and forward-pointing front wings meant that the front suspension was now back in the airflow. Brakes were outboard, a change from the inboard brakes on Philippe's Lotus 72 and Parnelli VPJ4. The main radiators were tucked in behind the tub, alongside the engine. Karl Kempf's innovative electronic recording equipment was much discussed, but its effect seems to have been limited.

Patrick Depailler stayed on as team leader, and was joined by Elf-backed driver Didier Pironi, who had raced in F2 during 1977, but had also won the Monaco F3 support race. Depailler immediately showed that the Tyrrell team were back to competitiveness, battling for second place in Argentina with Niki Lauda's Brabham-Alfa Romeo but just losing out. Although not among the quickest in practice, Depailler often proved very effective in the race, and he led the South African GP after Riccardo Patrese's Arrows FA1 retired, but was unable to hold off Ronnie Peterson's Lotus 78, and lost the lead with just a few corners to go. Depailler continued his fine run with third place at Long Beach, splitting the Lotus 78s. A fabulous start at the Monaco GP put Depailler into second place, running behind John Watson's Brabham-Alfa until the Irishman's brakes failed, letting Depailler through into a lead that he would this time retain to the chequered flag; the first victory for Tyrrell in nearly two years. At this point, Depailler led the World Championship standings by five points, but that was where it peaked for the 008. It retained its inability to qualify inside the top 10, but lost its ability to finish, and it would be five more races before Depailler added to his points total. A second-placed finish in the disrupted Austrian GP had a degree of fortune to it, but a fine race to fifth place in Canada could have been even better but for a poor choice of tyres.

The 008s were replaced by the new ground-effect Tyrrell 009 design for 1979, but two of the 008s were sold to Melchester Racing for the British F1 series, before becoming the first 3-litre F1 cars to move into historic racing. Three 008s survive, but two have always carried misleading chassis plates.