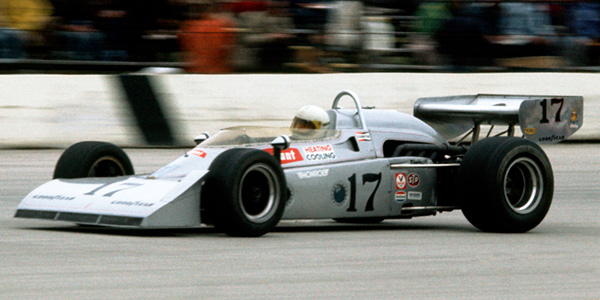 Dick Simon in the old Vollstedt 73/76 at Milwaukee in 1977. Copyright Glenn Snyder 2014. Used with permission.

Rolla Vollstedt's 1972 and 1973 cars were built from very similar monocoques and were used and modified together over the next three seasons.

By the start of 1972, Rolla Vollstedt had been running the same pair of 1967 Vollstedts for several seasons, most recently alongside a McLaren M15A owned by Gordon Johncock. When Johncock left to join the McLaren team in September 1971, Denny Zimmerman moved up from Frank Fiore's 1966 Vollstedt to become Rolla Vollstedt's lead driver. The new McLaren M16 design had completely changed the landscape of Indy racing in 1971, so Vollstedt had two new monocoques fabricated for the 1972 season by his long-time fabricator Harold Sperb. Only one of these was built up for the 1972 season, No 12 in Vollstedt's car numbering, following the lines of the McLaren M16 with side radiators and a very low wedge-shaped nose. It did not arrive in time for qualifying at the Indy 500, so Zimmerman used the McLaren M15A. The only other appearances by the team that season were the 500-mile races at Pocono and Ontario where Zimmerman qualified the new #27 Vollstedt 72 but retired early from both races.

The second monocoque was built up to a slightly different design in 1973, but the cars were modified in 1975 and 1976, ending up very similar to each other. The two cars were used as the team's main cars through to the end of the 1976 season, and one was used as a backup as late 1981. 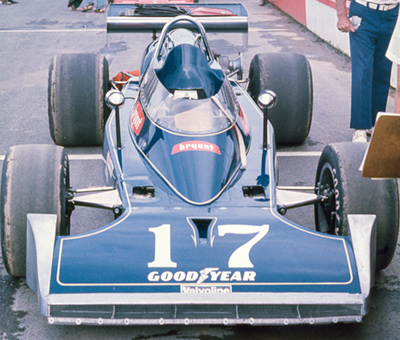 New for 1972 as the #27 Vollstedt Enterprises entry for Denny Zimmerman but arrived too late to qualify. Raced by Zimmerman at Pocono and Ontario in 1972 and then retained for 1973 as a backup to the new "bunkbeds" car and raced as the #27 by Tom Bigelow. It was Bigelow's intended #27 car at Indy in 1974 but crashed heavily on the second day of practice. Extensively rebuilt for 1975 with the radiators moved from McLaren-style sidepods to the nose. Bigelow preferred the 1973 car in McLaren form at the Indy 500, but raced the revised 1972 car at the Pocono 500. Used by Janet Guthrie as the #27 in 1976 but then retired. Donated to the Indianapolis Motor Speedway Museum in May 1982. Seen on display in the Museum between 2007 and 2010 but more recent pictures of the museum suggest the car is no longer on display. Still in the Museum collection in November 2021.

New for 1973 as Vollstedt Enterprises' #17 Norton Spirit entry for Bill Simpson but Simpson crashed during practice for the Indy 500, and the car could not be repaired in time for qualifying. Simpson drove the car again in practice for the Pocono 500, but left the team, saying the car was not fast enough. Bob Harkey took over the drive, and qualified. At the Ontario 500, Tom Sneva was brought into the team, but again crashed the car preventing it from qualifying. The car was converted to the McLaren-style design of the 1972 car for 1974 when it was raced by Bigelow as the #27 Bryant Heating car. Raced by Bigelow at Indy in 1975 but its usage during the rest of that season is still to be determined. Rebuilt extensively for 1976 with its radiators moved to the nose, the same as the 1972 car which had been modified the previous season. Raced by Dick Simon as the #17 Bryant Heating entry in 1976 and in early 1977. It was then retained by the team as a backup car in 1978 and was fitted with an AMC turbo V8 for some races in 1979. Its last known appearance was when driven by Gary Bettenhausen at Pocono in June 1981, when it was described as "an old shovel-nose car". Rolla Vollstedt's son Bruce recalls that the tub sat around for some time, the sides having been taken off with the intention of using it build a different style car. The sides were later put back on, it was sold to to Joe Green, and Rolla rebuilt the car for him in about 2001. Run at the Goodwood Festival of Speed in July 2011.

In 1973, the second car was built up with a blunter nose, wider sidepods and its main radiators within the sidepods, a shape clearly heavily influenced by the new Parnelli VPJ2. This "bunk beds" car, Vollstedt No 13, generally wore #17 in 1973 with Norton Spirit sponsorship, with the 1972 car, still in McLaren shape, wearing #27 and backing from Bryant. The Indy 500 went very badly for the team. Bill Simpson wrecked the new #17 in an accident on 12 May, and Tom Bigelow was bumped in the backup #27. The same pairings arrived at Pocono, but Simpson quit the team during practice, saying the car was not fast enough, and was replaced by Bob Harkey. This time both cars qualified, Bigelow in the older #27 and Harkey in the new #17. Bigelow was then the team's only driver at Michigan, but Tom Sneva joined the team for the California 500 at Ontario, only to wreck the newer car during practice.

Bigelow stayed with the team in 1974 for the races at Ontario, Indianapolis, Pocono and Michigan, and then Dick Simon and Bill Simpson drove the 1973 car at Milwaukee and Phoenix towards the end of the year. Bryant Heating & Air Conditioning were again the main sponsor.

Bigelow again drove the cars in 1975, again with Bryant support. The 1972 car was completely rebuilt for 1975 with the radiators in the nose, and was announced to the press on 1 April, billed as a new car. The aim was to move the weight to the nose. The new royal blue car wore No 27 and the old No 17 car, which the team called "black beauty", was kept as a backup. Bigelow had major handling problems at the Indy 500 with the new car, commenting that "whenever the car was in the turns it wanted to head for the wall when he pushed on the throttle". He ended up crashing the new car and had to qualify in 33rd position in the 73 car, which was still in McLaren-like specification with side radiators and a chisel nose. Bigelow left Vollstedt at the end of the season to join the Leader Card team after a remarkably unsuccessful three seasons with the Vollstedt team, failing to qualify inside the top ten even once, and with a best finishing position of ninth, and that in a particularly ropey field at Milwaukee in August 1975.

Dick Simon took Bigelow's place in the Vollstedt team for 1976, with Bryant faithfully remaining on board as main sponsor. In early March Vollstedt announced an Indy 500 entry for Janet Guthrie in the team's second car, the first time a woman had been entered for the Indy 500. The team used the two well-used 1972/73 cars for Simon and Guthrie, the 1972 car still in its 1975 specification, and the 1973 car now updated to a new 1976 specification, effectively matching the 72/75 car. Guthrie had her first "secret" test in the car at Ontario in February and drove the 72/75 car, with Simon in the 73/76 car. Guthrie made her race debut at Trenton, qualifying very well, but was unable to qualify for the Indy 500.

Rola Vollstedt acquired a 1976 Lightning for Janet Guthrie to drive in 1977 and also built a new Vollstedt as a copy of the Lightning for Dick Simon. The old 73/76 Vollstedt was also produced at a few races over the next few years, latterly being used with a turbocharged AMC engine in 1979. Photographs reveal that the 1973 car was used as late as June 1981, when USAC needed every possible car in an attempt to stop the Pocono 500 from being a complete humiliation.

My thanks to Simmo Iskül, Michael Ferner, Luis Mateus and 'gbl' for deciphering the histories of these cars, to Jason Vansickle, the Curator of Vehicles at the Indianapolis Motor Speedway Museum, for updates on the museum's No 12, and to Ralph Zbarsky and Rolla's son Bruce Vollstedt for information on No 13. Zbarsky wrote 'Vollstedt From Track Roadsters to Indy Cars the Rolla Vollstedt Story' with Rolla in 2003. Rolla Vollstedt died in October 2017 at the age of 99.

As these two cars were modified through 1974, 1975 and 1976, the key to distinguishing them is the area behind the driver's head. The monocoque is longer on the 1972 car between the back of the seat and the rollhoop, so the NACA duct is positioned differently. This demonstrates that Guthrie's car in 1976 was the original 1972 car and is the one later in the IMS Museum, while Dick Simon's car in 1976 was the 1973 car, which was Joe Green's car at the Goodwood Festival of Speed in 2011.