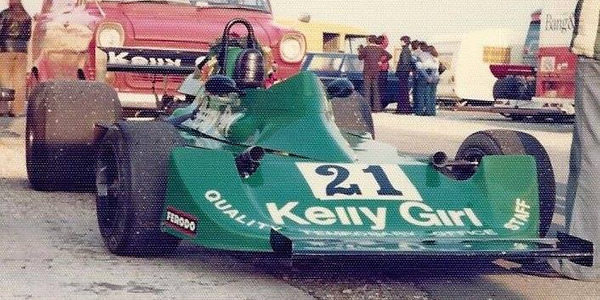 The Williams team's 1975 Williams FW04 design was the work of Ray Stokoe, but was an evolution of the John Clarke IR/FW series. Jacques Laffite took FW04 to an excellent second place at the Nurburgring.

The very wide Iso-Marlboro IR/FW series had suffered from bodyroll, and Ray Stokoe's FW04 monocoque was nine inches narrower and had the fuel cells more centrally positioned. The radiators were moved from behind the front wheels to ahead of the rear wheels, and the front suspension geometry was significantly different. Lead driver Arturo Merzario drove FW04 on its debut, but decided he preferred the older FW03, before quitting the team two races later. French F2 star Jacques Laffite raced FW04 for the rest of the season, and although the car was generally unreliable and qualified on the back half of the grid, he did make some headlines in the German Grand Prix where all but two of the 14 cars that qualified ahead of him retired and almost everyone else had problems, leaving the Williams to take the flag in second place.

For the US Grand Prix at Watkins Glen at the end of the season, a second FW04 was built, and the two cars became FW04/1 and FW04/2.  Both cars had been rebuilt with a full width Hesketh-style nose and side-radiators.  The second car was driven by Lella Lombardi at the US Grand Prix but did not start..

At the end of 1975, Walter Wolf bought into the Williams team and purchased the Hesketh 308C project, which was run in 1976 as the Williams FW05.  After being used briefly at the start of 1976, both FW04s were sold to Brian McGuire who ran the ex-Laffite FW04/1 in the Shellsport Group 8 series, giving the Williams marque its first F1 win at Thruxton in September 1976. For 1977, McGuire had the FW04 modified by Mike Pilbeam, and entered the car as a Pilbeam BM1.  In May, he swapped over to FW04/2, which had still not started a race at that point, and attempted to qualify this car for the 1977 British GP.  Just six weeks later, McGuire crashed the car in practice at Brands Hatch and was killed.  The surviving FW04/1 plus all the surviving components from the crashed FW04/2 passed into the hands of a restorer in the UK, and by 2018 both cars had been fully restored, FW04/1 to Laffite's front-radiator German GP specification, and FW04/2 to Lombardi's side-radiator US GP specification.