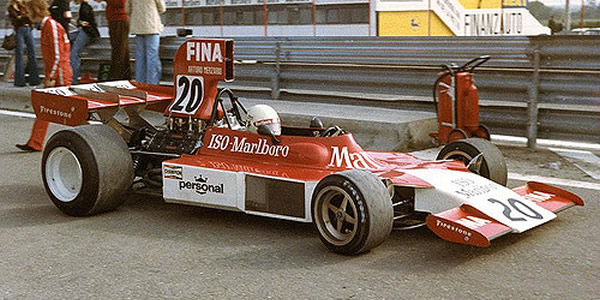 Frank Williams recruited ex-March designer John Clarke to produce a new series of cars for 1973. These were initially called Iso-Marlboro IR01 and IR02, but became Iso-Marlboro FW01 and FW02 in 1974, before being finally named as Williams for 1975.

The new Iso-Marlboro IR was built for the 1973 regulations, which required deformable structures along the sides of the cars. John Clarke's design followed the popular lower polar moment of inertia theory, so the fuel tanks were in the centre of the car, around the driver, the water radiators behind the front wheels, and the oil tank between the driver and engine. The monocoque was low and flat, with outboard spring/damper units all round. The first chassis was fabricated by Lynchford Products using NS4 aluminium in 18 gauge for the inner skins and the regulation 16 gauge outer skins. The Cosworth DFV and Hewland FG400 almost go without saying, and the rear wing support was initially an elegant monocoque item. In June 1973, Williams snuck Gian-Paulo Dallara into Clarke's drawing office one Sunday afternoon to look at the rear suspension geometry, but nothing came of it, and two months later Clarke left the team due to the lack of funding for any development. He was later replaced as team designer by Ray Stokoe. Two myths are worth nailing: the IR01 bore no resemblance to the team's earlier FX3 model; and Italian car maker Iso Rivolta was not involved in the car's construction.

Howden Ganley continued as main driver, but his teammate's job was to bring a budget, and 'Nanni' Galli was replaced by a string of paying customers. The under-funded cars started at the back of the grid, but improved as the season went on, with Ganley placing his tenth on the grid at Monaco. Gijs van Lennep's sixth place at Zandvoort and Ganley's sixth in Canada were the only points scored. Art Merzario joined the team for 1974, with the cars now being called Iso-Marlboro FW01 and FW02. A new car FW03 appeared at the Spanish GP, and Merzario took a fine fourth place at Monza in that car. Jacques Laffite joined the team during the season to drive FW02, and these two drivers continued into 1975 in what were now called Williams FW02 and FW03. A new Williams FW04 was introduced, but FW03 continued through 1975 for hire drivers.

The two early cars were consumed in a series of accidents, with one of the tubs being used to rebuild FW03 after Ian Ashley crashed it at the Nurburgring in 1974. FW03 survived and was sold to Loris Kessel who tried to qualify for the Italian GP in 1976, but was not allowed to practice. Kessel then took the car to Fly Studios, the design company of former Ferrari men Giacomo Caliri and Luigi Marmiroli, and they used it to construct the Apollon, an attractive yet hopelessly slow car in which Kessel failed to qualify again at Monza in 1977. It was restored to 1975 specification by an Italian owner in 1991, and has raced in historic events since 2010.