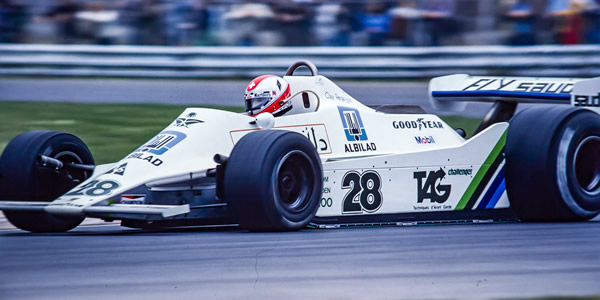 For 1979, Patrick Head designed his first ground-effect car, the Williams FW07, following the template of the Lotus 79 but with a number of detail improvements. Alan Jones and Clay Regazzoni won five GPs between them in 1979 in FW07s.

Patrick Head's Williams FW06 had been one of the most effective non-ground-effect cars in 1978, but the success of the Lotus 79 made it clear that Williams would need a completely new ground-effect design in 1979. Like the Lotus 79, the FW07 was very slender, with the fuel in a single cell behind the driver, a tall arched scuttle over the driver’s legs and wide sidepods containing the main radiators. The monocoque was made from an aluminium honeycomb sandwich material, giving it far greater stiffness than the 79, but this would need to be improved further for 1980 as the FW07 sidepods produced immense downforce. To keep the airflow as clean as possible, the car had inboard suspension front and rear, using top rocker arms and lower wishbones, outboard brakes and a central pillar rear wing. Head’s attention to detail was evident throughout the car. His assistants on the FW07 were draughtsman Neil Oatley and former Hesketh designer Frank Dernie, who joined in January 1979.

The first FW07 appeared at Long Beach but was not ready to race. Two cars were ready for Alan Jones and Clay Regazzoni to drive in the Spanish GP, where they showed promise but both retired. Jones then led the Belgian GP, only for the engine to fail, and ran third at Monaco before hitting a barrier. Regazzoni salvaged second place for Williams at Monaco and after the Renaults upset the form book at the French GP, the two FW07s ran 1-2 at the British GP. Jones was again unlucky at Silverstone, as his fuel pump failed, but 'Regga’ gave the team its first-ever F1 victory. Jones then won the next three races in succession and also the Canadian GP, to leap up to third in the championship behind the two Ferrari drivers. Regazzoni ended the season fifth in the drivers’ championship, and Williams second in the constructors’ title. The 1980 Williams FW07B would be even better.

Williams had new FW07Bs ready for the start of the 1980 season, allowing three of the 1979 FW07s to be sold off, in normal Frank Williams style, while the fourth was retained by Williams as a test car. All three available cars were acquired by RAM Racing who ran two of them in the 1980 Aurora championship for drivers Emilio de Villota and Eliseo Salazar. Such was their dominance that they effectively killed off the series. The third was driven by Rupert Keegan in the world championship, but he was well off the pace even when the car was updated to FW07B specification. The two ex-Aurora cars reappeared in the British F1 series in 1982, but all three ex-RAM FW07s came back to the Williams factory later in their lives.

If you can add to our understanding of these cars, in particular with information about their ownership in the late 1980s and 1990s, please email Allen at allen@oldracingcars.com.