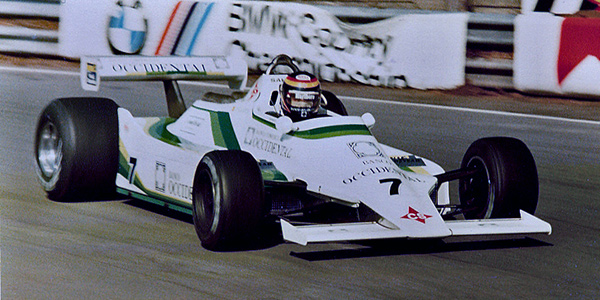 Emilio de Villota joined RAM Racing who acquired a pair of Williams FW07s for him and Chilean Eliseo Salazar, while Guy Edwards moved to the Clowes team to race the ex-Rupert Keegan Arrows A1s, now run by Ian Dawson's GRID. Desiré Wilson took over Theodore Racing's now rather aged Wolf WR4 and Ray Mallock bought the Surtees TS20+ as Team Surtees had withdrawn. Behind those five, the field was pretty thin.

De Villota easily won the championship, and such was the FW07s superiority that Salazar pipped Edwards to second place in the championship. Wilson started the season in spectacular form, qualifying third at the opener on Good Friday and then splitting the FW07s on the grid at Brands Hatch three days later and taking a deserved race win, still to this day the only time a woman has won a proper F1 race. Her funding did not last the whole season. Mallock also started well but destroyed the Surtees TS20+ at Thruxton in May and although he bought Wolf WR6, his return was too late to have a bearing on the title race.

Val Musetti had some good results in a heavily modified Fittipaldi F5A, as did Norman Dickson in the Lotus 78, but the few other F1s were well off the pace. The F2 contingent were able to pick up good results when the leading F1s retired, and Jim Crawford scored a popular win in the rain at Oulton Park in September in his Chevron B45. Poor Kim Mather had a terrible season in his flexing March 802. The strength in depth from 1979 had disappeared, and in September MCD announced that the series was to be "suspended". MCD would change their focus to Formula Atlantic.

The championship was held over 12 rounds using a 9-6-4-3-2-1 points system, plus 2 points for pole position and 1 point for fastest lap. Points table from Autocourse 1980/81 p233 except that Autocourse printed Mather's name twice instead of Walger.