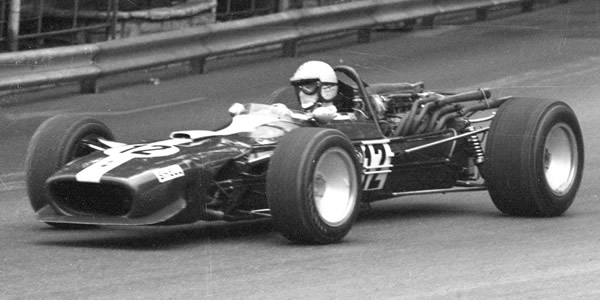 Vic Elford in the Cooper-Maserati T86 at the Monaco Grand Prix in 1969. Copyright Jim Culp 2017. Used with permission.

Cooper's 1967 F1 car, the one-off Cooper T86, was smaller and lighter than the T81B, and was fitted with Maserati's latest 36-valve V12 engine. The lack of power from the Maserati rendered the T86 uncompetitive compared with the Lotus-DFV, Brabham-Repco, Ferrari and even Honda.

The 1967 Cooper T86 first appeared at the British GP in July 1967, where it was driven by team leader Jochen Rindt, who had used the Cooper T81B for the first half of the season. The T86's monocoque was entirely new, and appeared much smaller than its predecessor, but the suspension was the same as the T81B. The Hewland DG300 gearbox was carried over from the T81B, replacing the massive ZF 'box used in the T81s. As much weight as possible had been shaved from the monocoque, which was skinned with magnesium metal alloy, lighter than regular aluminium. The main change was the appearance of the long-awaited Tipo 10 Maserati engine, a 36-valve 36-plug quad-cam magnesium block V12 unit which its makers claimed produced 400 bhp, compared with the 350-360 of the older Tipo 9. Roy Salvadori, who managed the Cooper team that season, reckoned it only gave about 330 bhp, the same output that was produced when the engine was rebuilt for historic racing 35 years later. The engine was 30 lbs lighter than the Tipo 9, contributing to an expensively won 112 lb weight reduction.

The car was not ready until the final practice session at Silverstone, but was immediately 0.5s faster than teammate Pedro Rodriguez in the 1966 Cooper T81. Rindt started eighth on the grid but retired the T86 from the race with gearbox trouble after losing oil. Rindt complained the new engine was down on power at the German GP, and in the race the engine sprayed out so much oil before it blew up that the following driver had to stop for clean goggles. The car was not even taken to the Canadian GP, where Rindt used Rodriguez' 1966 car as the Mexican was in hospital. At Monza for the Italian GP, the car was modified with a more elegant nose incorporating a spoiler to reduce lift, but Rindt was only 11th on the 18-car grid. The Austrian went very well in the early stages and was up to fifth by lap 10, and finished fourth. Rindt went back to the T81B for Watkins Glen, and the T86 was raced by newcomer Jacky Ickx, but he qualified on the last row and retired at mid-distance without making any impact.

For 1968, Cooper built new versions of the T86 for the BRM V12 engine, the Cooper T86B, and the T86 was retired after a single 1968 outing at the South African GP in the hands of Ludovico Scarfiotto. It was sold complete to Colin Crabbe's Antique Automobiles for 1969, and was driven by Vic Elford at a couple of races, including a seventh-place finish in the 1969 Monaco GP which would prove to be the last World Championship appearance by a Cooper. It then went to Falken Racing Developments Ltd and was used in libre racing later in 1969 before being sold to a Swiss collector, who housed it in his small museum at Rheinfelden in Switzerland for more than 30 years. This strikingly original car was acquired by a UK historic racer who had it reskinned and had the engine rebuilt with an aluminium block. It appeared at the Goodwood Revival in 2007 in this form before being sold to Japan, where it appears occasionally in demonstrations at Suzuka.