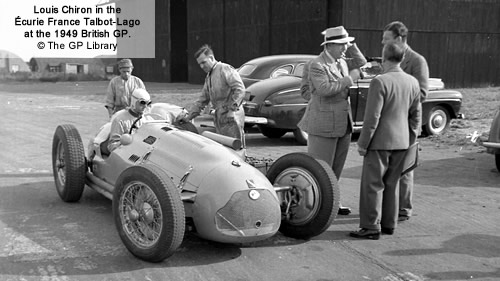 As in 1948, the AIACR nominated the Grands Prix of Britain, Belgium, Switzerland, France and Italy as Grandes Épreuves, the last of these being given the title European Grand Prix. After the slightly mysterious withdrawal of Alfa Corse, the Ferraris were the quickest cars of 1949, with Alberto Ascari winning at Bremgarten and at Monza, but Juan Manuel Fangio won five of the lesser Grands Prix in his Maserati 4CLT. Louis Chiron took a surprise win in his Lago-Talbot at the French GP after Luigi Villoresi's Ferrari and Fangio's Maserati both retired. It was the second time that season Villoresi had started from pole and retired - he'd suffered the same fate at Silverstone in a Scuderia Ambrosiana Maserati.

The only other marque to win in F1 in 1949 was ERA, Bob Gerard taking the newest of the B-Types, R14B, to victory on Jersey and on the Isle of Man as well as second place in the British GP.

8 May 1949 > Circuit du Roussillon at Perpignan

This area of ORC is dedicated to the memory of David McKinney (8 April 1945 - 25 February 2014) who was a great friend to OldRacingCars.com and one of its key contributors. Together with Adam Ferrington, David researched this area with his usual rigour and compiled the definitive race history of these seasons. David is best known for his expertise on the Maserati 250F and for his peerless knowledge of motor racing in his native New Zealand but the range of his knowledge was vast, matched only by the generosity with which he shared his knowledge. He is greatly missed.

Researching F1 in this early period is very different to researching the 1960s and 1970s. Before the late 1960s, there were no neat tables of chassis numbers available as a start point in contemporary publications and it was quite common for even the model of the car to go unmentioned in a report. Although Ferrari, Gordini, Maserati and Talbot-Lago numbered their cars in a reasonably consistent fashion, HWM, Alta and others did not and Alfa Romeo numbered frames and engines separately, assembling a car as required for each race and only labelling it with the entry number for that race.

However, we have the advantage that no two cars were ever identical - no two Ferraris are quite the same and Maserati 4CLTs and HWMs each have features that are unique to them. A trained eye can spot these differences in contemporary pictures and construct a race history for each car. The other major resource we have for this period is Denis Jenkinson's Racing Car Review, in which he covered each team in considerable detail, often giving important clues to individual car identities.

The F1 results used here were compiled by David McKinney and Adam Ferrington from a wide range of sources including Motor Sport, Autocourse, Autosport and the F1 Register book mentioned above. Individual car identities were then meticulously checked against their enormous libraries of books and photographs, notably Talbot-Lago de Course by Pierre Abeillon, Les Gordini by Robert Jarraud, Gordini – Un Sorcier, Une Equipe by Christian Huet and The History of English Racing Automobiles by David Weguelin. Michael Müller has contributed immaculately researched histories of all the 1948-1950 Ferrari 125s.

Since David's sad death, Adam and Allen have agreed that these pages will remain unaltered from now on, as a lasting testimony to David's expertise.