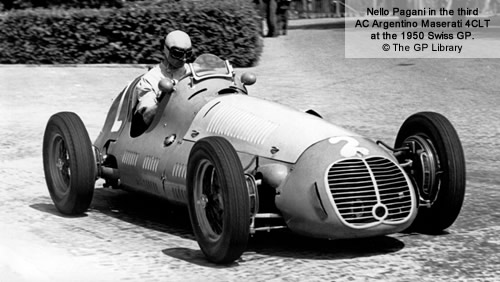 After skipping 1949 for reasons that are still not well understood, Alfa Corse returned to Formula 1 in 1950 with the Alfetta 158. With Achille Varzi, Count Felice Trossi and Jean-Pierre Wimille all dead, their places in the team were taken by Giuseppe 'Nino' Farina, Juan Manuel Fangio and Luigi Fagioli. With an average age of 45, this was hardly an injection of youth.

The FIA had announced a new World Championship for 1950, consisting of the five Grandes Épreuves from 1949 plus the Monaco GP. This competition climaxed at Monza with Farina clinching the title after Fangio had two Alfas break under him during the race.

The main competition was from Ferrari, who tried to overwhelm Alfa with numbers at the start of the season, and Maserati's 4CLT. Neither the lumbering Lago-Talbots or the new Simca-Gordinis were anywhere near as quick although reliability sometimes brought some rewards. The Alfetta were dominant: the first three places on almost every grid and enough reliability to be running 1st and 2nd at almost every finish. Only the new Ferrari 375, emerging towards the end of the season, looked like a serious rival.

The 21 races below are the significant F1 races of the 1950 season but other races were held for F1 cars or included F1 cars in a libre field. The six World Championship events of 1950 are shown in bold.

This area of ORC is dedicated to the memory of David McKinney (8 April 1945 - 25 February 2014) who was a great friend to OldRacingCars.com and one of its key contributors. Together with Adam Ferrington, David researched this area with his usual rigour and compiled the definitive race history of these seasons. David is best known for his expertise on the Maserati 250F and for his peerless knowledge of motor racing in his native New Zealand but the range of his knowledge was vast, matched only by the generosity with which he shared his knowledge. He is greatly missed.

Researching F1 in this early period is very different to researching the 1960s and 1970s. Before the late 1960s, there were no neat tables of chassis numbers available as a start point in contemporary publications and it was quite common for even the model of the car to go unmentioned in a report. Although Ferrari, Gordini, Maserati and Talbot-Lago numbered their cars in a reasonably consistent fashion, HWM, Alta and others did not and Alfa Romeo numbered frames and engines separately, assembling a car as required for each race and only labelling it with the entry number for that race.

However, we have the advantage that no two cars were ever identical - no two Ferraris are quite the same and Maserati 4CLTs and HWMs each have features that are unique to them. A trained eye can spot these differences in contemporary pictures and construct a race history for each car. The other major resource we have for this period is Denis Jenkinson's Racing Car Review, in which he covered each team in considerable detail, often giving important clues to individual car identities.

We also have the advantage of the excellent work of the historians who have gone before us. The F1 Register's A Record of Grand Prix and Voiturette Racing Volume 5 covers the 1950 and 1951 seasons and has been the primary source for race results. Also of enormous help were Talbot-Lago de Course by Pierre Abeillon, Les Gordini by Robert Jarraud, Gordini – Un Sorcier, Une Equipe by Christian Huet and The History of English Racing Automobiles by David Weguelin.

The F1 results used here were initially compiled by Rob Ryder from a range of sources including Autocourse, Autosport and the F1 Register book mentioned above. The three additonal libre races were added by David McKinney. Individual car identities were then meticulously checked and corrected by Adam Ferrington using his own enormous library of books and photographs. David has also contributed extensively from his notes on car identities compiled over 40 years of research, Michael Müller has contributed immaculately researched histories of all the 1948-1950 Ferrari 125s, and Doug Nye, both through his books and his personal assistance on HWM, has also been of great help.

Since David's sad death, Adam and Allen have agreed that these pages will remain unaltered from now on, as a lasting testimony to David's expertise.