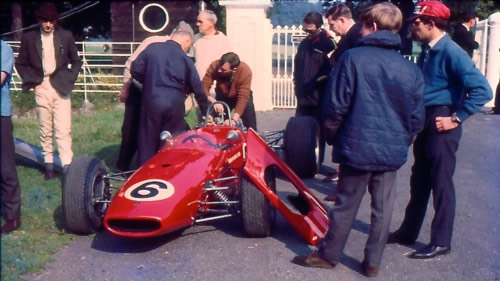 Ireland moved to a 1600cc class in 1967 with an All-Ireland Championship covering races north and south of the border. The quickest 1600cc car in Ireland in 1967 was Tommy Reid's Brabham BT23-twin cam but it arrived too late for Reid to feature in the title race which was a straight battle between 20-year-old John Watson whose father Marshall Watson, a Belfast Hillman dealer, had bought a two-year-old Brabham BT16-twin cam from Robs Lamplough to replace his Crosslé sports car, and Malcolm Templeton, the Ballymena Hillman dealer, who had retained his Brabham BT14-twin cam for a third season. Libre racing continued but the the 1600cc category was nearly always the feature race.

Going into the last race Templeton led on 58 pts from Watson on 56 but with Templeton having to drop one of his scores, Watson calculated that he needed only fifth place to win the title. So it would turn out; after Watson pitted to have a plug lead replaced, he scrambled back through the field to finish fifth, albeit fourth in the 1600cc class.

Other quick cars in Ireland included the factory Crosslé Type 12F, driven by John Crosslé and by John Pollock, the sister car of David Baird, Pollock's own Lotus 27/32/35 and the pair of ex-works Brabham BT18's of Kevin Murphy and Reg Armstrong.

This first championship was held over eight rounds with the best six results counting. The points system used appears to have been 8-7-6-5 with the Dunboyne Trophy and the Phoenix Park race counting double.

Points table from Irish Wheel Magazine Nov 1967 p35. Wheel also confirms that Tommy Reid's Brabham BT23 had a twin cam engine when it first appeared at Kirkistown on 23 August, not a FVA. Simon Thomas believes the FVA engine was not initially allowed in the national formula.

A new category of racing was introduced by the 500MRCI for 1967 to replace the ageing 1172cc Ford specials. Called Formula Impala, it was for open wheel single-seaters of any spcification but restricted to the 875cc Hillman Imp engine in standard production form. Full details of this formula are in Wheel Oct 1966 p25.

The results shown here are assembled from the race reports and brief results sections published in Autosport and further details in Irish Wheel Magazine. Wheel was edited by Brian Foley, who was also Autosport's Irish correspondent, and was published in Dublin. Scans were kindly provided by Alan Drysdale.

Further information has been provided by Alan and by Simon Thomas and David Neilson.

Chassis identities are mostly based on work elsewhere on this site but acknowledgement should be made to the Alexis Register and to Duncan Rabagliati and Peter Jackson for their help with ex-Formula Junior cars.

Photographs have been kindly provided by Julian Massey.

A total of 13 twin-cam cars appeared in 1967. Apart from the eight already mentioned, the others were Lingard Goulding's new Alexis Mk 10, the indecently quick 1.5 Crosslé of Brian Cullen, the ancient Cooper T67 of Luke Duffy, Denis Kingham's slow Alexis Mk 8 and the old GRM.

A 14th, Gerry Kinnane's Lotus 35, was prepared for the season but didn't appear. Richie Heeley raced his Lotus 22/31 with a Ford 1650cc engine or a supercharged 1.5 Allard but wasn't eligible for the 1600cc category. Frank Keane had a Lotus 18 with a 1570cc Alfa Romeo engine but, like Heeley, stuck to hillclimbs and this car also didn't start a 1600cc class race.

The other car that deserves a mention was Mick Mooney's 4.7-litre Crosslé 10F in which Tommy Reid mopped up libre races until it was sold to the US. John Pringle's Cooper-Oldsmobile, which had been the main over-1600cc single-seater in previous seasons, was sold to an English competitor after the 1966 season. Pringle retired from racing but remained Chairman of the 500MRCI.