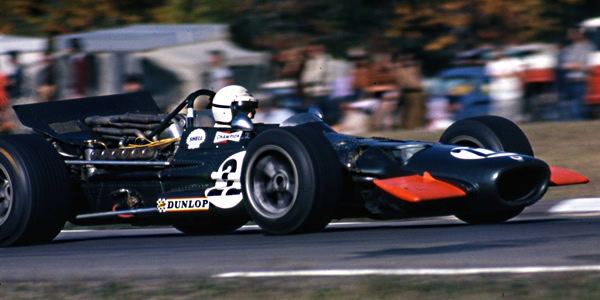 George Eaton had a turn in the rent-a-drive BRM P138 at the 1969 US GP, the last appearance of one of the unloved P138s. Copyright Norm MacLeod 2017. Used with permission.

BRM team leader Pedro Rodriguez was allocated the P138 for the Italian GP, but the new car was a big disappointment, the Mexican qualifying 15th out of 20. He was given a choice of the P138 or his previous P133 for the Canadian GP, and preferred the older car. Rodriguez stuck with the P133 thereafter, but new recruit Bobby Unser drove the P138 at Watkins Glen after he had written off his intended P126 in practice. By this time the BRM team had lost its way, with internal politics adding to problems of poor decision-making in the Bourne race team. John Surtees joined BRM from Honda for 1969 and quite quickly imposed his will on the team.

The new P142 48-valve V12 engine was ready for 1969, and one was fitted to a new P138, chassis 138-02, for Surtees to drive at the South African Grand Prix, but it broke a tappet guide in practice and Surtees started in 138-01 with its regular 24-valve P101 engine. The 48-valve engine was back in 138-02 at the Race of Champions two weeks later but Surtees ran over something in practice which punctured a tyre, and 138-02 was comprehensively destroyed at Westfield. After a long night transferring the new engine into the sister P138, the BRM mechanics found it had ingested some mud, so Surtees withdrew. Surtees then finished 5th at the Spanish GP, but he was the final finisher from a mere 14 starters and three laps behind fourth place. This turned out to be the best performance by a P138, which says rather a lot about the model. A new model was then produced, but this P139 barely differed from the P126-133-138 cars and when the new car failed to impress, Surtees forced the sacking of chief engineer Tony Rudd. The surviving P138 continued in use as a spare car and then for hire deals, before being retired at the end of the year. Somehow, this car, less engine and gearbox, was later seized by Canadian customs, and stayed in the country for many years. Nobody at BRM seemed especially keen to retrieve it.