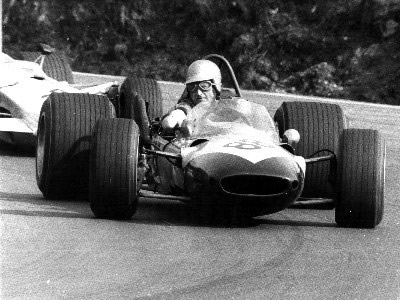 Chris Summers in his Lotus 24 at Brands Hatch in April 1968. Copyright Ted Walker 2001. Used with permission.

As well as the purpose-built cars, the Lotus 42 Indy car was converted for Formula 5000 for the factory, and both ex-Formula 1 Lotus 43s were converted to F5000 by Ken Nichols for Robs Lamplough in the UK in 1968. Also, two earlier ex-Formula 1 Lotus 24s ran in occasional British F5000 events (including Chris Summers' chassis 942 shown here) as did an ancient Lotus 18 (Mike Panico's chassis 910, also coincidentally ex-Chris Summers). One of the Lotus 40 sports cars was converted by Chas Beattie to be the 'Conchord' F5000.

Also in the US series, Vernon Shields appeared in a Lotus 35 with a Ford 289 V8 built for him by Marvin MacAfee. This car appeared rarely. One outstanding mystery is the USAC Lotus that Gil Roth (Wexford, Penn) entered and advertised in 1970 but never raced.