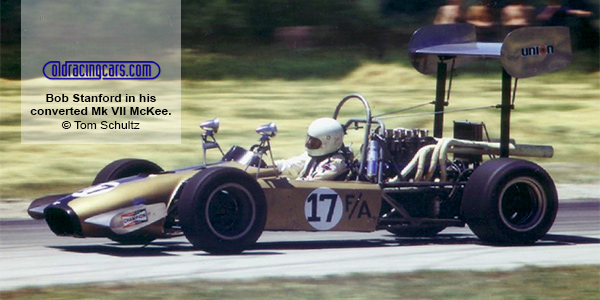 Like many American engineers, Bob McKee cut his teeth building dragsters and stock cars, before moving to Indy racing as Dick Rathman's chief crew. An early convert to the rear-engined revolution, McKee built a Cooper-Buick for Rodger Ward in 1961 and later developed his own McKee transaxle. His first five cars were one-off specials but, in 1966, he built his first production car, the Can-Am McKee Mk VI. Mak Kronn would take one of these cars to victory in the 1966 Road America June Sprints but they were not quite quick enough to make an impact in Can-Am.

After the Mk VII, another sports racer, in 1967, Bob McKee branched out and built his first single-seater, the 1968 Formula A McKee Mk 8. Although McKee's focus was on his increasingly ambitious Can-Am cars, a lightly revised McKee Mk 12 was built for F5000 in 1969 and three orders were quickly taken: Team Nappi for Kurt Reinhold, Chuck Trowbridge and Dick DeJarld. Another two cars appeared later in the season, Hamilton Vose's USAC McKee Mk 11 and Bob Stanford's converted Can-Am "Mk 7S". Four of the five appeared together at Road America: Trowbridge, Reinold, DeJarld, Vose with Stanford only appearing at the Sebring race.

One of the 1967 McKee Mk VII Can-Am cars was converted for Formula A after it was crashed heavily by Bob Nagel at Mid-Ohio. Owned by Bob Stanford (Mars, PA) and pictured above, it first raced as early as the December 1969 Sebring event, it was variously described as a "7F" or "7S". Stanford had cut off the side pods and taken the interesting route of putting the fuel cell in the passenger seat. It was sold by Stanford to Chuck Haines in the mid-1970s and was sold by Chuck to Jerry Dykhuisen (now Big Pine Key, FL) who converted it to closed wheel specification and used it in SCCA ASR National and Regional events. In 1978, Jerry sold it back to Haines. Timothy W. Mehallick (Mt Pleasant, PA) reports that he purchased the McKee from Chuck Haines circa 1980-81, and restored it with McLaren M6 bodywork. In the summer of 1987, he sold it to Mike Kalashian (Wisconsin) who raced it in historic events up to 2014. It was auctioned by Russo and Steele in January 2015. In early 2017, the car was advertised by David Neidell (Pontyclun, Wales).

These histories last updated on 4 November, 2021 .