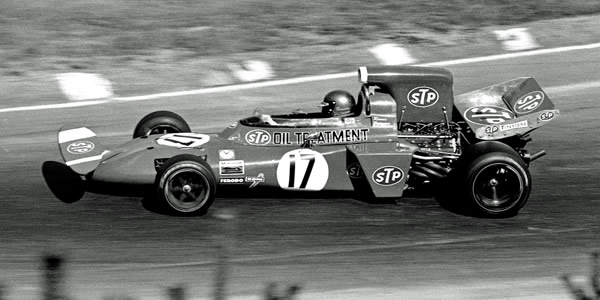 The combination of the advanced March 711 and Ronnie Peterson was highly effective in 1971, the Swede taking second place in the World Championship behind Jackie Stewart.

The very orthodox March 701 had started the 1970 season well, but had been overtaken by the Lotus 72 as well as the more powerful V12 engines, so Robin Herd started with a clean sheet of paper for his new 711. The front springs were inboard, on the front of the monocoque, and actuated by elegant slender rocker arms that formed part of the suspension's upper wishbone, similar to the trendsetting Lotus 56. Another Lotus inspiration was the inboard brakes, but these were moved outboard after a brake-shaft failure at the Brands Hatch Race of Champions. The radiators were at the car's hips, clearly inspired by the Lotus 72 and it was not a coincidence that much of the detail design work on the 711 was done by Geoff Ferris, who had been Maurice Phillippe's assistant on the 72 at Lotus before joining March in April 1970. The 711 was a "full monocoque", in that the skins wrapped over the driver's legs, instead of the "open bathtub" of the 701. The side radiators allowing a smooth, rounded nose, topped by a very distinctive elliptic "unicorn" or "tea tray" front wing, and the 711's unorthodox aerodynamic design was the work of Frank Costin, there being a distinct resemblance to his 1967 Protos Formula 2 car. His enclosed rear bodywork was quickly discarded however, and the front wing proved effective in clean air but gave unpredictable handling when behind other cars.

March had also done a deal with Alfa Romeo to use their V8 engine that McLaren had used in the McLaren M7D and M14D in 1970, but this proved to have no advantages over Cosworth's DFV. Ronnie Peterson drove the lead car during 1971, and Andrea de Adamich accompanied the Alfa engines from McLaren to drive the second car. Alex Soler-Roig was the team's No 2 driver at the start of the season, but his drive went to Alfa favourite Nanni Galli. A fourth works entry was driven on occasion by the highly-regarded Mike Beuttler, and once by a little-known Austrian called Niki Lauda. Customer cars were bought by Frank Williams Racing Cars for Henri Pescarolo, and by Gene Mason for Skip Barber. Peterson was outstanding in the 711, finishing second at Monaco, Hockenheim, Silverstone and Monza, and March tied for third place in the constructors' championship with Ferrari.

After the 1971 season, three of the four works 711s were not seen again, which fed a belief that they had been used to build the early-1972 721s. However, no evidence has been found to support this theory. The two customer cars went to Brazil and the USA, and remained there until recent times. Of the works cars, one was sold to a Swiss owner in 1973 who did nothing with it for many years, one was sold to Howden Ganley for equally mystifying reasons, one was sold to a hillclimber for an ambitious project that never saw the light of day, and one was rumoured to be in the basement of a European museum. The first two of these cars have now been restored for historic racing, but the latter two are effectively lost for now. They will turn up eventually.

In addition to the two genuine 711s running in historic events, two March 721s were also converted "back" to 711 specification in the 1980s, and have been used in historic racing ever since. Despite the best efforts of the Monaco organisers to keep out such cars, both have appeared in the Grand Prix de Monaco Historique.