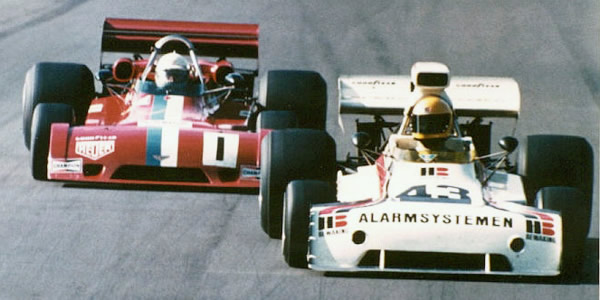 Teddy Pilette in the BDS Chevron B28 about to pass the ex-VDS Chevron B24 of Wunderink as they approach Shaws Corner, Mallory Park 1974. Copyright Mark Scanlon 2005. Used with permission.

Derek Bennett Engineering was formed in 1966 to produce Clubmans Formula cars but it was not long before the idea was floated of 'putting a roof on one' and moving into GT racing. The GT Chevron B3, like Bennett's B1 the year before, won on its debut and the little cars from Bolton began to make a big reputation.

At the end of 1967, a prototype Formula 3 car appeared in the hands of a young Peter Gethin and a first toe in the waters of F2 followed in 1968. The company consolidated its position in sports racing with a highly successful series of cars: the B16 and B19 also winning on their debuts. Single-seater success came in F3 and in US Formula B and the company returned to F2 with derivatives of these smaller cars.

In March 1978, with Chevron perhaps at its peak, Derek Bennett died following a hang gliding accident. The company reorganised and brought in Tony Southgate to design a ground-effect version of the B42 for 1979 but both the F2 and F3 cars flopped and new Managing Director Dave Wilson pinned Chevron's hopes on a Can-Am design, the B51. With sales disappearing in their traditional markets, the company went into liquidation early in 1980. The assets of the company passed to Robin Smith's consortium and later, in 1983, to Roger Andreason and Tim Colman.

All and any help with the F5000 Chevrons would be gratefully received. Please email Allen at allen@oldracingcars.com if you can add anything.