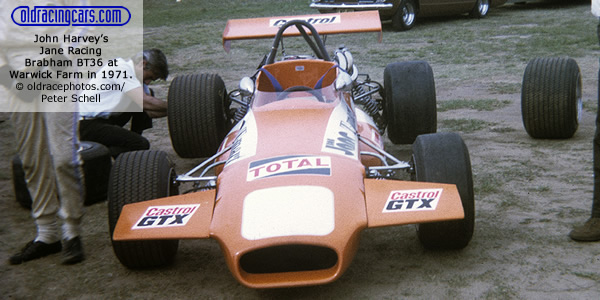 Having thought long and hard about what was best for Australian domestic racing, 2-litre racing engines or 5-litre stock blocks, CAMS decided to have both. The 1971 Tasman series proved that the 2-litres could not compete, so few people could see the sense in the decision. Leo Geoghegan put his Lotus 59B on the market and decided to move to touring cars.

Kevin Bartlett should then have won the Gold Star. He won three races in his McLaren M10B, including the non-championship Sam Hordern Trophy at Warwick Farm, but he retired or was otherwise delayed three times, and that was too much in the six-race series, leaving him tied for second place with the sister M10B of Alan Hamilton. John McCormack also won a race, but his new Elfin MR5 was not ready until the season was half way through. So the title fell to the car that shouldn't have been able to win, the 2-litre Mildren-Waggott of Max Stewart, whose consistent point scoring pipped Bartlett and Hamilton by just a single point.

The other race winner was Frank Matich in his oft-crashed McLaren M10B, but he did not compete in the whole series. At the Australian GP at the end of the year, he debuted his new Matich A50 and won first time out, establishing himself as the clear favourite for 1972.