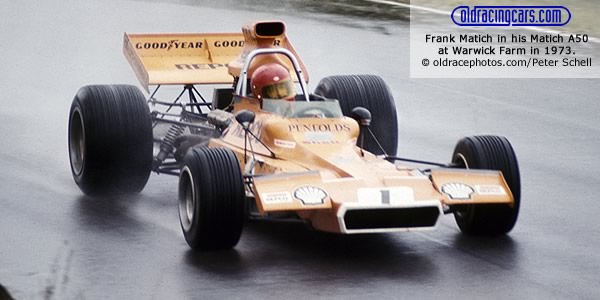 Having won the Gold Star series in 1972, Frank Matich took a pair of cars out to the L&M series in the US in 1973 but had a dreadful time. He returned early and prepared a new car, the Matich A52, for the opening round of the Gold Star series at Surfers Paradise in September. After starting from pole position, Matich retired from the race and then decided to pull out of F5000, putting all his cars up for sale.

That left only seven F5000 cars in the country that would appear more than once in the series: the locally-built Elfin MR5s of John McCormack, Garrie Cooper and John Leffler, plus three Lola T330s belonging to Kevin Bartlett, Johnnie Walker and Max Stewart, and Howie Sangster in Don O'Sullivan's McLaren M18/M22.

McCormack won at Surfers and Adelaide, and then Walker took a very poorly-supported race at Phillip Island. The next round was the Australian GP, where Graham McRae won on his first outing in his new McRae GM2, but as he was not eligible for the Gold Star, McCormack's second place gave him maximum points again. Walker won the final round but with another thin field, McCormack only had to finish to secure the championship.