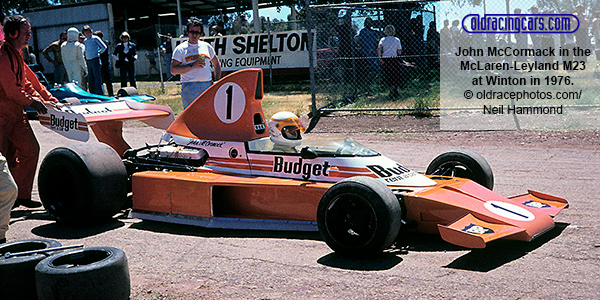 Max Stewart bought a second Lola T400 at the end of 1975, the one prepared by Haas Racing as a backup for Brian Redman and therefore probably the best developed of the T400s, and raced it in the 1976 Gold Star. Ken Shirvington had also bought the T400 developed by VDS for Peter Gethin, and John Leffler had acquired the last car built from Carl Haas, so with Kevin Bartlett still having his car, five T400s raced in Australia in 1976. Up against them were two interesting new cars: John McCormack installed the lightweight Leyland P76 alloy engine in an ex-F1 McLaren M23, and Garrie Cooper produced the Elfin MR8.

After John Goss won the Australian GP in his Matich A51/A53 from Vern Schuppan in the new Elfin MR8, the remaining three rounds were won by Stewart, McCormack and the Lola T332 of Alfredo Costanzo, but when the points were counted it was Leffler that had won the title.

The 1976 Australian results have been compiled primarily from the Australian monthly magazine magazine Racing Car News and the UK magazine Autosport. The relevant Australian Motor Racing Yearbooks and the book "Australian Grand Prix, the 50-Year History", were also used.