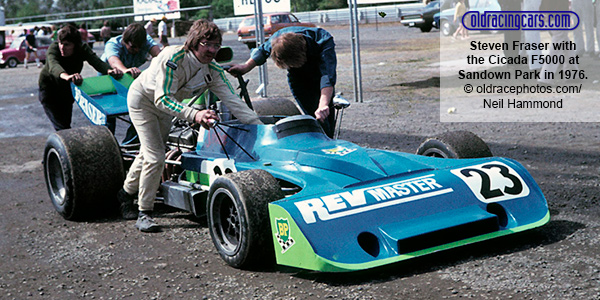 Although no longer counting towards a combined Tasman Cup, the Australian Internationals followed straight on from January's New Zealand Internationals as usual and much of the field was the same, with top Australian drivers Bruce Allison, John McCormack, Max Stewart, Kevin Bartlett and Johnnie Walker joined by Kiwis Ken Smith and Graeme Lawrence. From further afield came Theodore Racing with a Lola T332 for Vern Schuppan, David Purley in a Lola T330 entered by Richard Oaten, and John Cannon with his March 73A/751 bitza from North America. By the third race at Sandown 20 cars were running in practice.

Lawrence and Allison were fastest at Oran Park but both went off when caught out by rain, then Cannon's March retired with waterlogged electrics, leaving Schuppan to win after a well-timed stop for wet tyres. Another wet race followed at Adelaide, where Purley led by two laps at one stage, having been the only person to start on wets, but he ran into the back of Terry Hook's Lola in the spray and was out. Smith then led, but was being caught by Schuppan at the rate of seven seconds a lap, only for Schuppan to have to pit twice to dry out the engine, leaving him just four seconds adrift of Smith at the flag.

Sandown was mercifully dry, and John Cannon led from start to finish, his competitors dropping out one after the other, Allison while he was in the process of overtaking him, to leave Schuppan in second. Both Cannon and Schuppan had engine problems in the closing laps but hung on to finish in that order. Australia's dreadful weather continued and after being postponed a week, the final race at Surfers was cancelled due to the continuous downpour. This confirmed Schuppan as champion, with Allison unlucky to come away with nothing more than two pole positions.