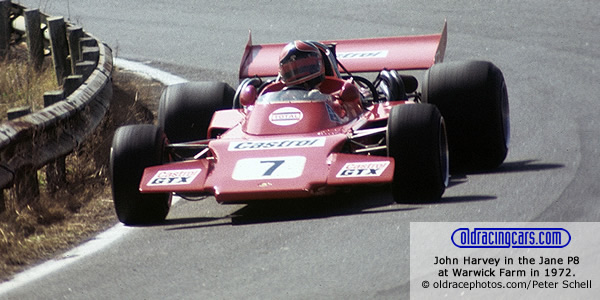 The top runners in Australia in 1972 were Frank Matich in his exciting new Matich A50 powered by Repco's Holden V8 Formula 5000 engine; fellow veteran Kevin Bartlett who started the season in a well-used McLaren M10B before upgrading to a new Lola T300; and Bob Muir, who bought a Lola T300 that Niel Allen had wrecked in a testing accident. Bartlett spent much of the year in North America, where he had a second T300, and Muir also took his T300 to the Americas. In its absence, Muir used Ken Goodwin's Formula 2 Rennmax BN3 at two of the Repco Birthday Series races. Matich focused on Australian racing, and cleaned up, with seven wins from eight starts in major domestic races, and easily won the Gold Star title.

As well as the Gold Star, the 1972 season saw a series of races at Calder celebrating Repco's 50th birthday. The otherwise dominant Matich only turned up for three of the five races, and failed to start one, so only won two rounds. Bob Muir won the opener in his Lola T300, but when that car was shipped to the US, Bartlett ran out the winner at the August and October rounds, and a third place behind Matich at the final race was enough to clinch the title.

Australia was now well stocked with F5000 cars. As well as Frank Matich's own A50, there was a sister car for Johnnie Walker, plus four more Australian-built cars in the Elfin MR5s of Garrie Cooper, Max Stewart and John McCormack, and the Bowin-built Jane-Holden which proved a struggle for John Harvey. Three Lola T300s were present, for Bartlett, Muir and Gary Campbell; Don O'Sullivan had a McLaren M18/M22; Warwick Brown was very quick in Pat Burke's McLaren M10B, Colin Hyams had one race in his Lola T192 before shipping it off to the US, and Kiwi Frank Radisich made a couple of appearances in the heavily-developed ex-Matich McLaren "M10C". However, the 2-litre cars were disappearing: Bob Jane's Waggott-engined Brabham only making a couple of appearances in John Harvey's hands before Jane's F5000 car was ready.

The Repco Birthday Series awarded points on a 9-6-4-3-2-1 basis for each class (F5000 and ANF2), but also points for outright positions on a 6-4-3-2-1 basis. No final table was published, so Glenn Moulds has reconstructed the table based on results.