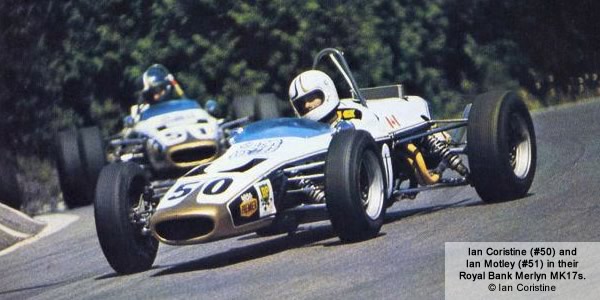 Several more Formula B cars arrived in Quebec for the 1970 Molson series. Jacques Couture and David McConnell had a pair of new Lotuses entered by the new Jim Russell Racing Driver School which had just opened at Mont Tremblant, with Counture as director and chief instructor. The Lotuses were described as "69Bs" but were 59s fitted with the latest 69 bodywork. Three Brabham BT29s had also been acquired, for defending champion Peter Roberts, Fred Opert agent Brian Robertson and Ken Huband. Eligio Siconolfi had acquired Bill Brack's Lotus 41C and there were also a McLaren M4A, a Chevron B15B, a Lotus 59, a Brabham BT16 and a Crosslé further down the grids.

Six races counted towards the 1970 Molson championship, five at Mont Tremblant and one at Trois-Rivières. Couture advertised his new driving school with four wins with one also doing to teammate McConnell and the other to Robertson. Robertson would also prove key to the development of formula racing in Canada as he became the main importer of racing cars through the 1970s.

As in 1969, Formula Fords made up a large proportion of the grids and Ian Coristine was again quickest of these in his Royal Bank team Merlyn MK17, followed by teammate Ian Motley. Jean-Pierre St Jacques' locally-built Magnum Formula Ford also scored points. To illustrate the changing shape of Quebec racing, 40% of the Molson grids were Formula Bs, a little over 50% were Formula Fords and less than 10% were Formula Vees.

Note that Peter Roberts scored a total of 49 points so it appears that he had to drop his lowest score, the four points he scored in the 6 September race. Some out-of-region drivers participated, notably Bruce Jensen who was fourth in the opening race and fifth on 2 August in his Brabham BT21C, and Al Justason who was fifth in the 24 May and 20 September races in his Brabham BT23F.

Older cars were still in use, notably the Lotus 41C and Chevron B15b.

There was little coverage of this series in specialist motoring press but local newspapers, notably the Montreal Gazette, produced reports. The results here are taken from official results sheets provided by competitor Ian Coristine and by Dominic St-Jean of Quebecois motor racing website autocourse.ca. Ian has achieved greater fame since as a photographer (see 1000 Islands Photo Art).

Full results are known for five of the six races but are still needed for the finale at Mont Tremblant on 4 October. Qualifying times and grid positions are needed for all six races.