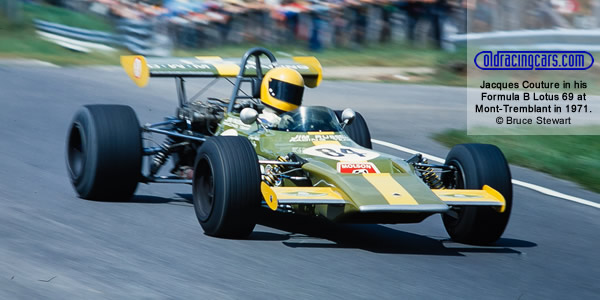 The Molson Quebec series continued into 1971 but it has proved difficult to get a complete picture of the season. The main contenders, as in the new national FB series, were Jacques Couture and Dave McConnell in a pair of new Lotus 69s (called 69Bs) and Brian Robertson in a Fred Opert Canada Brabham BT35. The three were virtually inseparable over the season but the March 71BMs also proved very quick.

A table after the 15 August race showed a seven-round series with races on 16 May, 31 May, 4 Jul, 15 Aug, 29 Aug, 12 Sep and 9 Oct. Dominic St-Jean's excellent autocourse.ca has been our sources for the September and October races, the season-decider being a race at the new Circuit Ste-Croix at Ste-Croix de Lotbinière, Québec. David McConnell had won the penultimate round from teammate Couture and held a one-point advantage for the title. Like the Players round the weekend before at Westwood, the Ste-Croix race was held in pouring rain and again Couture failed to make the start, this time because of an accident. So McConnell cruised to victory against a very weakened field and clinched the Molson title.

With the success of the Players national championship, the Molson series did not continue in 1972.

Older cars were still in use, notably the Brabham BT29 and Chevron B17b.

There was little coverage of this series in specialist motoring press such as Canada Motorsport Bulletin but but local newspapers, notably the Montreal Gazette, produced reports. The results here are taken from official results sheets provided by competitor Ian Coristine and by Dominic St-Jean of Quebecois motor racing website autocourse.ca. Ian has achieved greater fame since as a photographer (see 1000 Islands Photo Art).

Qualifying times and grid positions are needed for all except the 16 May 1971 race.