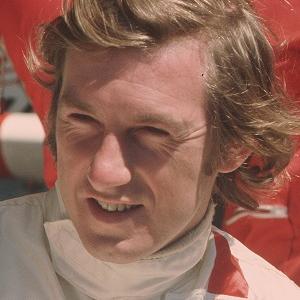 RJ: In comparative terms, you were a little bit older than the average driver when you took up racing, when you visited the course at Brands Hatch in 1965. What sparked your interest in racing and what were your interests before beginning a racing career?

GE: I went to a race at Oulton Park, in Cheshire, and watched all the cars going around. My friends were jumping up and down with excitement. I just felt jealous and I knew I just had to race.

So I told my Dad that this is what I wanted to do and he said that I had to do my university entrance exam at Durham University; get a degree and only then could I think about racing. So that’s what I did.

The day after I finished university, I went straight down to the Brands Hatch circuit in Kent, where they were making a film about Stirling Moss. So, I asked the manager of the racing school, a man called Jeff Clarke, “Could have a job?” He said “What sort of job?” I said “I’ll be your secretary”, to which he replied “I don’t need a secretary!”

So I said that I would work for £5 a week and for 10 free laps in a racing Cooper. Jeff said “Okay, I will pay you £5 per week and 10 free laps in a racing car”. I found lodgings at a house opposite the circuit, which was owned by John and Angela Webb and moved in. John had been a commando in World War Two and I remember that he still had his old commando knife. They were very good to me and I really enjoyed being there. When I finally became a racing driver I always invited George Webb and his family to attend my races.

RJ: You made your debut in a Ford Anglia at Snetterton in 1965. What do you remember about your first race and your first racing car?

GE:  I had a 1650cc Ford Anglia, which was built by the Croydon speed shop, which was run by Peter Hillard, and I stayed over at his shop. Unfortunately, with that first race, the engine was badly prepared and it blew up and that was that.

RJ: What prompted the switch to racing Minis instead of the Anglia?

GE: Racing a Mini Cooper, at that time, was the cheapest way into racing that I could achieve. So, I approached Tim Conroy, who ran his own racing school in North London, and asked him if I could drive for him, to which he agreed. He had a lead driver called John Cannadine so I partnered him.

RJ: You started racing a Chevron B8 in 1969 with some good results in Barcelona, Denmark and Croft, amongst other tracks. What was the Chevron like to drive?

RJ: You varied your racing but largely concentrated on sportscars for the bulk of the early 1970’s. Was this discipline always an area you had planned to concentrate on, or was it circumstance that led to you becoming a sportscar regular?

GE: Circumstance. Well, the answer is that I got sponsorship by Barclays international, to race a Lola sports car in the British Sports Car Championship. Therefore, it made sense to drive in the category for them. I won the first race in the Lola, and many more afterwards.

RJ: You raced a varying amount of Lola cars in the early-mid 1970’s; what was your favourite Lola car to drive and why?

GE: The Lola T292 was my favourite Lola. This was mainly due to the success I had with it. I won the Trophy D’Auvergne at the Clermont-Ferrand circuit in France, chased hard by Chris Craft, who finished second in another Lola, racing for Crowne Racing.

GE:  Firstly, I had won two big Formula 5000 races; one of which was The Trophy of the Dunes at Zandvoort, in Holland. I won by one second in the pouring rain, chased hard by Tony Dean in a Chevron. So I was confident in my ability and my current stock with Lola.

I approached Lola and they were building a car there; it was a Formula 1 car, which they said it was for Graham Hill. So I approached WD & HO Wills in Bristol and met the racing manager Peter Dyke, and put my case forward for sponsorship on the second Formula 1 Car which was to be run with Hill’s car.

It was a Lola, sponsored by Embassy, and I went to Graham Hill to ask about the second drive. He said there were three people in the frame. Mike Hailwood, Tim Schenken and myself. In the end, Mike Hailwood was not available and Tim Schenken knew nothing about sponsorship, whereas I knew a lot, so in the end I got the drive. So, subsequently, I went to see solicitor Lewis Cutner and signed the contract that very day. It was £1000 per Grand Prix. Working with Graham, well, Graham was loved by everyone. He achieved so much. 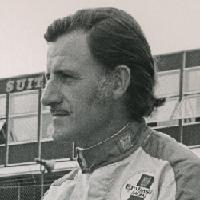 RJ: What is your favourite memory of your Grand Prix debut in Argentina and then subsequently of the 1974 season?

GE:  My favourite memory of my first Grand Prix was actually meeting Juan Peron and his wife. As for that first season, I feel my best moments were seventh place at the Monaco GP and then seventh place again, at the Swedish GP at Anderstorp.

RJ: Did you feel that Hesketh, without James Hunt, weren’t the same team and weren’t as focused so much?

GE: Well, Hesketh rented out two cars to both me and Harald Ertl. Certainly they weren’t as focused as James Hunt was when he won the World Championship. Hunt leaving seemed to shift the focus somewhat. 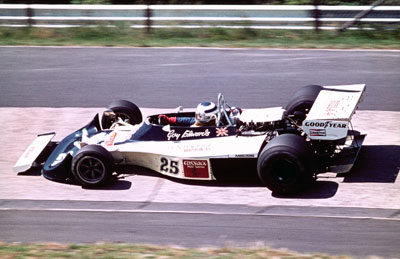 RJ: You managed to get backing from the Encyclopaedia Britannica for Formula 5000 in 1975; how did this sponsorship opportunity come about, because it wasn’t necessarily an obvious racing target?

GE: Well I brokered it; I approached Britannia and their president Joe Adams and offered him a deal, but it was also through Brands Hatch’s managing director, John Webb. I remember we offered deals to everyone who bought a set.

RJ: Was motorsport sponsorship something you were always interested in or was there a spark or incident that led to you going down the sponsorship avenue?

GE: I was always interested in sponsorship, yes. Sponsorship was not allowed in England, at the time I started racing, because of antiquated rules by the RAC, who did not allow sponsor’s names on the cars like America did. You could have it on the entrance licence but not on the car itself. Colin Chapman was the first to change this when he got a 100% sponsorship from Gold Leaf Cigarettes. I was then the second when I got a 100% sponsorship from the Torline Shipping company to sponsor my Chevron international sports car racing attempts.

RJ: What went through your mind initially when deciding to stop and save Niki Lauda at the Nurburgring in 1976, for which you won the Queen’s Gallantry Medal as a result?

GE: It was just a natural response. I was there, and there was no-one else there initially except a few marshals. Then Brett Lunger joined in, then Harald Ertl, my team-mate and then Arturo Merzario joined us and we finally dragged Niki out of the car. I felt very honoured to win the Queen’s Gallantry Medal and I was very honoured to be presented with the medal by the Queen personally herself.

RJ: One of your more noted sponsorship deals was the Penthouse Rizla agreement that helped secure your Hesketh drive. Did you have to do anything different with this particular deal to convince the relevant authorities to allow it?

GE: Not really, I approached Bob Guccione, who owned Penthouse, with the idea that if Penthouse would provide me with what’s called a “Filler a Space” in their magazine, I would then find someone to buy it. Eventually I approached Rizla and George Pincus with the deal, and so I got a Penthouse Rizla car in GP racing!

GE: It was so slow on the straight that we withdrew the car from the British GP!

RJ: What led to your racing return in 1988 after a few years away?

GE: One year, I had Peter Hall, who was the owner of ICS, asking me to get a sponsor for Andy Rouse’s turbo charged saloon car team. That sponsor was Kaliber, who would sponsor the whole team, but they would also include a car for myself, which I raced for a couple of years.

RJ: What, for you, is your personal highlight of your racing career? 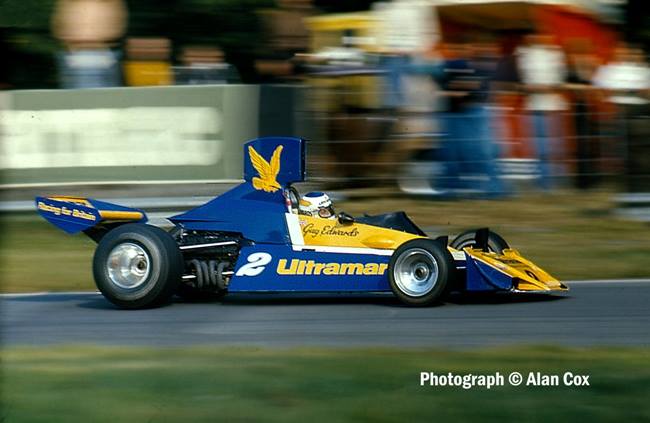 RJ: The list of sponsorship deals you’ve pulled off; from Silk Cut with Jaguar, Castrol and Kaliber with Andy Rouse, which you just mentioned, is the stuff of racing legend. Is there one deal that was your particular favourite and if so, why?

GE: My first real deal with Barclays Bank. I put a proposal to Barclays Bank, who had been trying to sponsor a cricket tournament but were turned down. The chairman, Sir Anthony Tuke, was mortified. My programme landed on his desk about the same time and in a fit of pique, he said “Do this instead!” and they did! 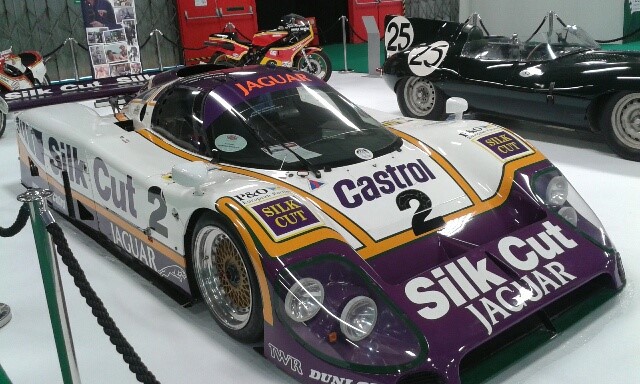 RJ: Along a similar line, who, looking back, did you feel, initially, would be the hardest sponsor to convince coming into the sport?

GE: Definitely Findlaters Whisky. Even in those days, drink and driving was frowned upon and the last thing anyone expected to see on a racing car was whisky. But it happened!

RJ: Obviously you put many thoughts and tips into your book; Sponsorship and the World of motor racing but do you consider what you advised then to be as relevant today? Do you think it is more difficult to get sponsorship due to widescale banning of tobacco and alcohol advertising? Also, If you were a commercial director for a F1 team now, which companies would you target to sponsor the team?

GE: Yes, I do, it is still relevant. No, it’s not more difficult, you just must be more creative in your approach. In terms of companies to target, definitely computer companies, the IT Sector.

Many thanks to Guy Edwards QGM for his time, especially as he is not in the best of health these days. Interview conducted in March 2018.