RJ: Tell us a bit about your father (Charlie Chassey) as I know that?s where the racing bug came from for you? ?
SC: My Dad drove "Big Cars" in the 1930's, but when he started his family he quit driving, but always went to the races, and so at my first race that I attended, I was carried to it by my Mom.

RJ: When you started racing, it was in stock cars. Why did you decide to start in this particular discipline?
SC: When I was 17 I went to Saugas Speedway and got the bug for racing. I then built my first car a 49 Olds.

RJ: You started your career by building and racing cars. Was this deliberate ? had you always planned to combine both roles or was it just the most practicable option available to you?
SC: It was the only way to start - who would give a kid - with no experience - a car?

RJ: Had you always decided to return to racing after your tour of duty in Vietnam, or was this reinforced by your time there?
SC: Yes, but I sold my stock car and my Dad had a Sprint car. I asked him if I could drive it but he had Bob McCoy driving. So I went out and found a very old shit box car to drive and when my Dad saw that he changed his mind!

RJ: Did your experiences in Vietnam make you approach your racing differently or have any influence on how you raced?
SC: Not at all, that was a different part of my life

RJ: You raced in a wide variety of different cars ? sprints, midgets, dirt cars ? what for you, as a driver, were the easiest, and also the most difficult aspects about switching from driving one type of car to the other?
SC: There was no real difference in switching, other than weight and power. You drove them all the same. It?s only when you drive Indy cars that it?s different.

RJ: What, in your opinion, was it about the Jet Rod that made it such a successful car?
SC: A few things, Weight, offset, and what I had learned over the years about how to maximize the equipment.

RJ: What is it, for you, about the Indianapolis 500 that made making it there a priority in your racing career?
SC: From the very beginning that was the goal for all drivers in the open wheel cars however, that dream is now a thing of the past in the new age.

RJ: You know and worked with the great Dan Gurney ? what?s your recollections of your time with Dan?
SC: Dan was -and is - a great friend. He was very smart and was weight conscious so when I approached him about building a car with all Titanium parts he jumped at it, and was a very good sounding board for a rookie. 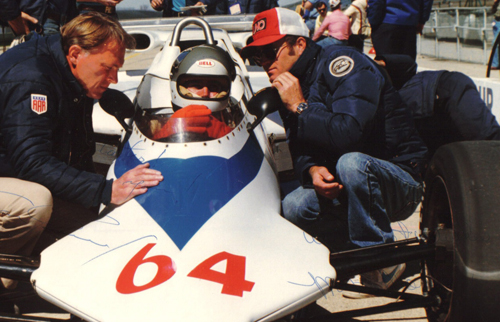 RJ: Did you ever consider racing in Europe?
SC: No I didn't. However, had I ever driven road courses before the Indy Car days, rather than ovals, I may have wanted to.

RJ: You were often your own mechanic and engineer on top of your driving duties ? did you find that doing this was a hindrance to your racing, or did you prefer the control and challenge this allowed?
SC: I did that because I had to. I would much rather have had all the help that I saw at the large teams but that was not possible on the budget we had to work with.

RJ: You normally had good results at the Michigan International Speedway ? why do you feel you did so well there?
SC: I did well on all of the banked tracks in all types of cars. I guess I just felt that comfort level that one needs to run hard at all the banks.

RJ: One of your most serious crashes was at Indianapolis in 1984 ? how do you motivate yourself to get back into racing when you have had a crash like that?
SC: I would say that working a normal job was not enticing and it ? crashing - is just one of those things that just may happen in that line of business.

RJ: Who do you consider to be some of the best drivers you raced against and why?
SC: No need to say why the names say it all. In no order just names, AJ Foyt, Rick Mears, Mario (Andretti), Gordy (Johncock), (Gary) Bettenhausen, (Bill) Vukovich, and I could go on and on - just look at the line ups from the races.
Starting from the Saugas stock cars I raced against people like Ron Hornaday, Bill Foster, Frank Deney and many others.
In the Sprint cars at Ascot and the West Coast names I raced against drivers like Allen Heath, Bob McCoy, Paul Jones, Bob Hogle and on and on.

RJ: With the benefit of hindsight and time elapsed since, do you regret your televised spat with Larry Nuber at ESPN?
SC: There was really no spat with Larry he was just aghast at what I would say - and if (Rich) Vogler hadn't tried to kill me on more than one occasion (Chassey raced against Vogler regularly), then I would not have said those things but at that time there was a big problem with him. Do I wish I hadn't done that? Only because I believe I would still be doing commentary if not for that.

RJ: You worked as a general manger for Euromotorsports ? did team management or ownership, especially with your technical knowledge, ever appeal?
SC: In hindsight, yes however, I wanted to be a driver. Had I quit the driving and done a management job I could possibly still be involved.

RJ: How did the opportunity to become involved with Lola and their North American sales and distribution facility come about?
SC: I was operating the motorsport insurance business and spent a lot of time in the Hass trailer and became friends with the Lola personnel and it just grew from there to the opportunity after Hass and Lola fell out. It was just my luck they produced the worst Lola for 1997 that was ever built. I had to negotiate with a few tough people like Gerry Forsythe, and Pat Patrick to buy back the cars and spares. That was not fun.

RJ: What inspired you to get involved in motor racing insurance?
SC: I was just trying to stay involved after I quit driving and came up with the idea.
I put together a five year actuarial of the losses and cost. I went to London and sold the idea to Lloyds of London and other London companies. We had 21 underwriters involved at that time.

RJ: Finally, there are comments on the internet that you were a male model and/or a pop singer? Can you, once and for all, confirm or deny either?
SC: I was in fact a Male Model, yes. I was also a child actor and worked with The Lone Ranger and Tonto, Tony the Tiger, Art Linkletter and many others from that era.
I was the double for the actor/singer Fabian, when they used my yellow 57 Olds for the movie Fireball 500. Annette (Funicello), Frankie Avalon and "Chill" Wills were the stars of that film.
I was indeed the lead singer in our group and did sing back up for other successful groups on many weekend nights at the Pacific Ocean Park.