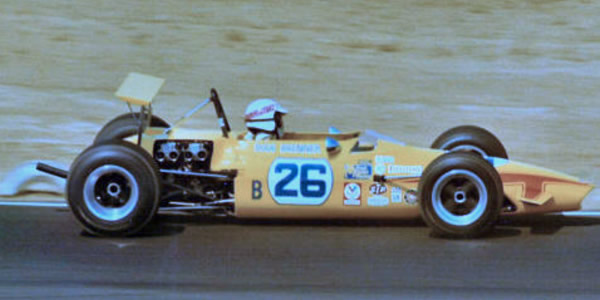 Max Mizejewski found that his 1967 ex-F2 Lola T100 was the most potent car in Southern Pacific Formula B, winning the divisional title from Greg Gosar who started the season in an equally aged Lotus 41C, probably one of the twin cam-propelled 41Cs that came to the US in 1967. The early-season pace setters were Jay Jamison in his newly-acquired Brabham BT29, Doug Brenner in the brand new Chevron B15B with which Reine Wisell had won the Sebring Pro race at the end of December, and Jack Byers in his usual McLaren M4A. All three left the series after the first three races, Jamison and Brenner to follow the Pro FB series and Byers to move up to Formula 5000 with a Lola T190.

With the big guns following the Pro series, the two summer Riverside rounds fell to young David Jaques' "Mattel", the ex-Hap Sharp Brabham BT2 rebuilt after Earl Jones' accident in it in 1965, and 1969 FC champion Tito D'Oporto in the one-off ex-F3 LeGrand Mk 5, but when Mizejewski and Gosar returned for the fall races, they quickly took control. Mizejewski was second in class at Bonneville behind NPDiv invader Mike Hansen and then won the class at Ontario and Phoenix. Gosar had acquired a Winkelmann over the summer but was still no match for the Lola, finishing second in each of the final two races. The points he earned out of division meant he remained in touch, forcing Mizejewski to take in the final NPDiv National at Stead AFB to ensure he could not be caught.

Formula B continued to flourish at SCCA Divisional level in 1970. Brief reports on the Divisional seasons are available below: