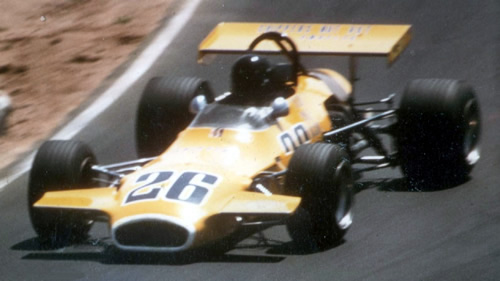 Bill Middleton won the division comfortably in the Lola T240 that he'd bought late in 1971 season before replacing it with a new Brabham BT38B. Also in T240s were Ted Titmas and Gordon Strom but neither had significant success and Strom replaced his with a Brabham BT35 before the start of the Pro series. Strom then appears in the NorPac FB table in the Brabham.

Larry Wright came closest to Middleton in his BT29, a car he had owned from new but would wreck early the following year. Dick Doherty also scored points in a BT29 but he moved up to a new March 722 for the Pro season and there were four more of the popular BT29 model further down the grids plus a converted BT28.

Bruce Eglinton drove Masahiko Kaneko's Mana 08 at least once and the results suggest he may even have won a National. LeGrand proved they were still a force, at least locally, and two of the constructor's MK 14 design competed in SoPac.

NB In 1972, SCCA tables did not show where points were earned out of home divisions.