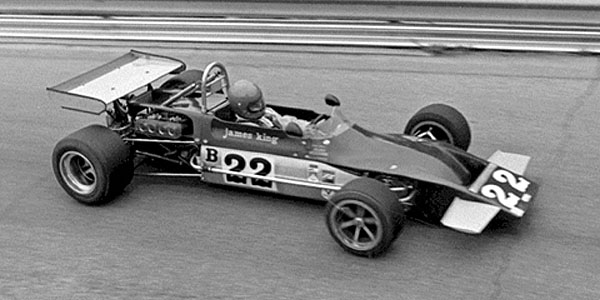 Bob Lazier concentrated on the Pro series in 1972, leaving 1971 runner-up Gordon Smiley to take the title from James King. Smiley stuck with his 1971 Merlyn and showed his talent with a couple of appearances in the Pro series, dominating the Road Atlanta race after beasting Lazier to pole and later finishing second at Road America.

James King had acquired the ex-Bob Lazier March 71BM and Bob Schutt had upgraded from his venerable Brabham BT18 to a BT35. Further back was Frank Dickerson who had acquired the 1964 Brabham BT9 that Chuck Grauel had raced in FC but had blown up the MAE engine so had fitted a twin cam and moved up to Formula B.

The Lake Garnett Grand Prix returned to the schedules for 1972, having been called off due to safety concerns in 1970. The return saw two accidents, involving the tragic death of Ralph Miller and serious injuries to Formula C driver Al Essig. It would never he held again, and Kansas City Region thereafter moved to being co-organisers of some of Kansas Region's Nationals at Hutchinson's Sunflower Aerodrome of Mid America Raceway.

NB In 1972, SCCA tables did not show where points were earned out of home divisions.

Race results for Midwest Division Nationals from 1970 to 1978 have been kindly provided by veteran MiDiv historian Rocky Entriken. We also have some background information from Competition Press up to about 1973, when its interest in such events waned considerably, but we know little of the goings-on away from these events and are are keen to acquire or borrow 1960s, 1970s and 1980s copies of SCCA regional publications from this Division. The key ones are: