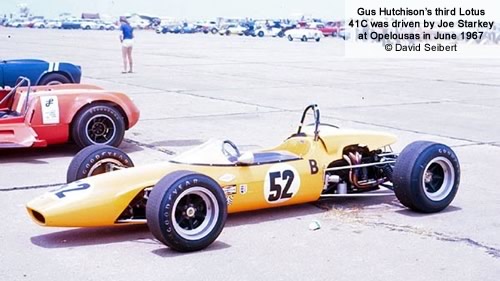 SWDiv woke up to Formula B in 1967 as Gus Hutchison and his team of Lotus 41s (or Lotus 41Cs depending on the reporter) blazed a trail across the continent. Gus himself focused on the brand new Pro series but team mate Harold Krech made sure he took time out to win the Divisional title. Joe Starkey drove the third team car at War Bonnet and in a couple of Nationals, and Jack Pagan was given a drive in Hutchison's car at Austin, also winning comfortably. Young Terry Petmecky had picked a bad year to venture into Formula B but was still able to take third place in the Division overall thanks to consistent perfomances in his old Lotus 22 topped off by a second place at the Selma National in Southeast Div in his newly-delivered Brabham BT21A.

Texas, Red River, San Jacinto and Lone Star Regions all maintained the same venues as 1966 but Central Louisiana moved their National from Ryan Field, Baton Rouge to St Landry, Opelousas. Also Alamo Region moved their operations from Seguin Airfield to a new 2.5-mile course at Clear Springs Auxiliary Field, sometimes referred to as Clear Creek, and held a second National there, bringing the Divisional total up to seven. New insurance rates forced Alamo Region to hold their May event without spectators, suggesting to some commentators that smaller regions may soon be forced out of racing.

Six racetracks were used in SWDiv in 1967. Two, Austin and Green Valley, were road tracks built around drag tracks and the others were airfield tracks.

Texas World Speedway (College Station, TX) was to open in 1969.