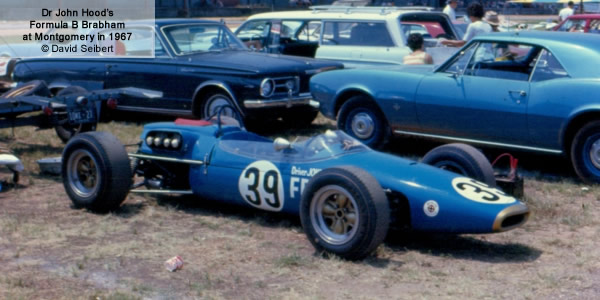 Formula B was spread pretty thinly in the south east, with at least 200 miles and as much as 600 miles separating the four competitors from each other. John Hood travelled the widest, taking in Pro events at Lake Tahoe in California and Mont-Tremblant in Canada, and also won the SEDiv title comfortably. In his home division, he was completely dominant, winning at Fernandina Beach, Savannah, Courtland, Osceola Field and Palm Beach. His Brabham has not yet been identified but as the picture above shows, it looked very much like a Brabham BT18.

Behind Hood were two US-built prototype FB cars. Bob McQueen had acquired a LeGrand Mk3B from California, reputedly the first car built, and Bob Mercer drove the prototype Formula B Beach, a T-11 chassis number 101. At the very end of the season Hugh Kleinpeter appeared in FB in another Beach T-11 and was leading the Palm Beach F/SCCA race comfortably when his engine blew.