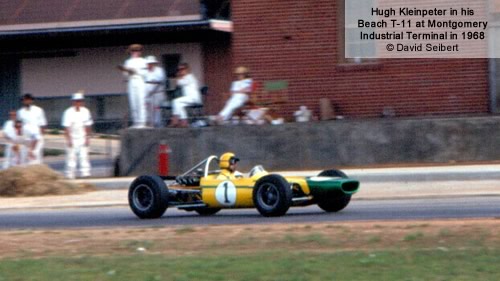 Hugh Kleinpeter and Johnny Tremblay were the main contenders in Southeast, Kleinpeter's Beach finally emerging the winner. Kleinpeter won at Palm Beach at the start of the year and after Montgomery fell to a NEDiv raider, Robert Mercer won Fernandina Beach in another Beach. Kleinpeter won his second National at Savannah with 1967 champion John Hood well back in second place. Tremblay, from Orlando, had made a name for himself racing Mini Coopers and had now moved up to Formula B for 1968, winning the Courtland National in May in a Cooper. This was quickly replaced with a 1967 Brabham BT21A and he won again at Huntsville Airfield in June and won his class at Savannah International Raceway in July. Kleinpeter came back and levelled the scores at three wins each by taking the class at Daytona Beach in August. The final VIR National fell to drivers from the stronger Northest Division but Kleinpeter was amongst the leaders for much of the race and scored enough points to secure the SEDiv title.

The presence of Beach Racing Cars at Clearwater, Florida, had a big impact on local FB with four of the seven point-scoring drivers in the local product. Bob Mercer had one of the first Beach T-11 Formula B cars, believed to be chassis 101, while Kleinpeter's car was chassis 103 and Jim Hebberd's was 105. The Type 11 was developed into a Formula Ford car for 1969. The only other points scorer in 1968 was Chattanooga Region's Noel McGlothlin who had taken delivery of a brand new Brabham BT21C.

Apart from one or two custom-built facilities, notably, VIR, much of SEDiv racing was done on airfield courses with just haybales to mark out the course.

The SCCA also listed four more airfield tracks in the area: Selma and Sharp's Field in Alabama and Corry Field (Pensacola) and Osceola in Florida. Work started on Road Atlanta (Braselton, GA) during 1969 and it would open in Sep 1970.