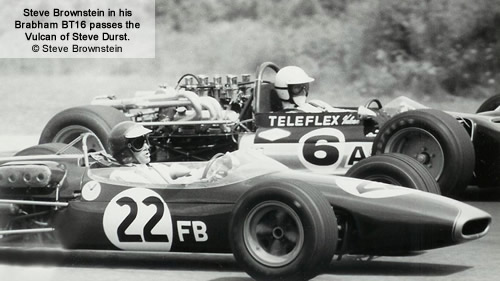 The influence of local dealer Fred Opert was being seen in the North East Division where 21 drivers scored points and 11 of them were driving Brabhams which were now flooding into the country via Opert's operation in New Jersey. Despite his customer base, Opert was trumped by two works-assisted teams finished first and second: Lotus agent Fred Stevenson won the title in a Lotus - a 20 according to Sports Car but actually the same 41C he had driven in the Pro series - and Roger Barr was second in his Crosslé, almost certainly a 12F.

Bill Gubelmann was a regular in the Pro series and had acquired a Formula B version of the successful BT23 Formula 2 car. Of the other Brabham drivers, Mike Hiss and Fred Ashplant were seen in the pro series in their BT21As, as were Carson Baird and Oliver Grant in older BT18s. Nick Craw, Bob Welch, Mike Hayman and Peter Goetz all had new BT21Cs but the Brabham of Bruce Kearsley is not yet known.

Peter Rehl converted his Cooper T88 from Formula C specification to FB during the season but it continued to be referred to as a Cooper-BRM. Two more Crosslés appeared further down the listing, driven by Bruce Klussman and George Faraghan. Both are believed to have been 12Fs.

This points table above appears in Sports Car magazine which lists the Nationals included as Marlboro, VIR, Cumberland, Bridgehampton (both halves), Thompson, Lime Rock (NNJ), Lime Rock (Mohawk-Hudson), SCIR, Watkins Glen, Bryar and Marlboro. The first Marlboro was The Governors Cup; Cumberland would have been the Annual Cumberland Sports Car Races; Watkins Glen had SCCA Nationals supporting a Trans-Am race; and the second Marlboro was The Marlboro National Championships.

Most of our knowledge of NEDiv racing comes from the SCCA's Sports Car magazine and from Competition Press & Autoweek. We are very keen to acquire or borrow 1960s, 1970s and 1980s copies of SCCA regional publications from this Division. These include:

North Carolina Region, which moved from NEDiv to SEDiv in 1969, has made its newsletter available online at the NCR website.

Marlboro Motor Raceway was to close after the 1969 season and Cumberland would only last a little longer, hosting its last Nationals in 1970. Replacing them was Summit Point Raceway about equidistant between them in Jefferson County, WV. Up in the north, Thompson was focused on oval racing and its road course fell out of use after 1969.