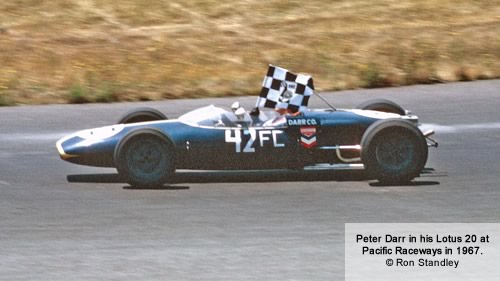 Formula B cars were still thin on the ground in Northern Pacific in 1967 with most cars again coming from San Francisco Region. Steve Griswold had built up a new LeGrand Mk3B from a kit in partnership with John Wilkins and fitted it with a self-built dry sump Alfa Romeo GTA engine. This was easily the most competitive FB kit in the Division and Griswold won two races on his way to the Northern Pacific title and finished a fine fourth in the Pro race at Lake Tahoe.

Tony Boothby and Mike Brodie took the next positions in the Division in antique Lotus 18s and behind them came Larry Albedi's Bourgeault, the creation of local constructor Nadeau Bourgeault. Nade only built four or possibly five for Formula B or C: the Formula C car that was raced by Nick Reynolds; two original FBs for Albedi and John Kuenzli; and a later FB for Al Brizard. Ed Marshall had a Bourgeault in 1969 and Chuck Billington had one in 1970, suggesting a fifth may have been built. Nade died on Christmas Eve 1971, age just 45.

San Francisco Region also ran a regional championship which included races at Cotati (April and July), Laguna Seca (May and October), and at the airfield at Crows Landing (September).

Most of our knowledge of NorPac racing comes from the SCCA's Sports Car magazine and from Competition Press & Autoweek. We are very keen to acquire or borrow 1960s, 1970s and 1980s copies of the three main SCCA regional publications:

We are also keen to get scans of entry lists from SCCA Nationals, notably the Laguna Seca Sprints and the Rose Cup Races.