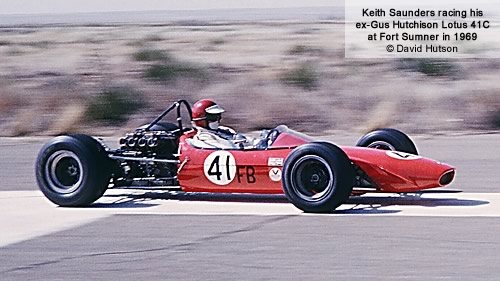 With 1968's leading drivers having moved up to the Pro series, their old Lotus 41Cs having been finally put out to pasture and the Lotus 51 Formula Fords now with their own class, SWDiv FB started the season with anaemic grids. In August, having virtually wrapped up the FV category, Butch Harris bought a new FB Winkelmann WDB1 and quickly won two events. Harvey Simon also moved into FB with a new Caldwell and a couple of Formula Ford Winkelmanns also competed in the class.

The top three, Harris, Simon and Joe Duran, were all entered for the Runoffs but did not race.

Again there was a steady evolution of the SWDiv schedule. Texas Region again had two events at GVR, and Sowela, San Jacinto and Lone Star were fixtures at Lake Charles, Scholes Field and Austin Aqua Festival respectively. Alamo Region were refused permission to use Clear Springs Auxilary Field by the Federal Aviation Authority, so had to move their Carrera del Alamo event in May to Austin Raceway Park (called Austin Dragway Park at this time) before finding a new home at Camp Gary Air Force Base. Lone Star were down to just one event, and West Texas Region's race at Odessa was not repeated. San Jacinto kept the numbers up with an event at an airfield at Conroe.

Older cars were still in use, notably the Brabham BT21C, Brabham BT23F, Chevron B14 and Lotus 41C.

There was a very active Formula B racing scene at SCCA Divisional level in 1969. The top three from each of the seven SCCA Divisions were invited to the Runoffs in November to decide a national champion.

The tables are taken from the SCCA's Sports Car magazine November 1969 pp30-39.