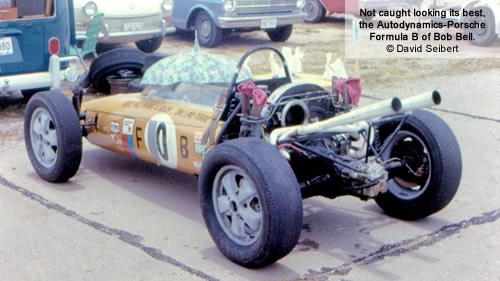 Formula B flickered into life in Texas in 1966 and three cars scored points in SWDiv Nationals races. Thanks to the SCCA points scoring system, the challenge in many of the divisions at this stage of FB's development was to have enough cars in the race for points to be awarded. In SWDiv this only happened often enough for Bob Bell to get a class win and a second, and for David Stroffolino and Gus Hutchison to get one win each. Bell therefore took the title in his Autodynamics-Porsche D3, a design based on Autodynamics' successful Formula Vee car but with a 2-litre Porsche 356 engine. David Stroffolino had a De Tomaso chassis, very probably one of three imported by Mecom Racing Team, which had been fitted with an Alfa Romeo twin cam engine.

The third competitor, Gus Hutchison, would go on to have the greatest impact on Formula B, winning the Continental Championship in 1967. His car was described as a Yancey Special but race reports referred to him driving a Lotus 22 or Lotus 31.

A considerable number of the scheduled SCCA Nationals in Southwest Division did not go ahead leaving just these six. Four were held on airfields with just one dedicated facility, Green Valley Raceway, and the street races that were held as part of Austin's annual Aqua Festival.