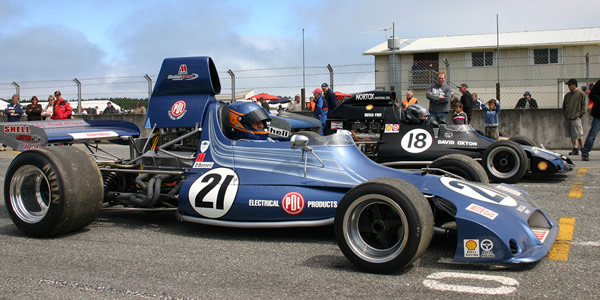 During the New Zealand winter of 2006, members of the New Zealand Formula 5000 Association headed off to the UK, Europe and the USA to race their cars, leading to considerable reciprocal interest in the 2006/07 season. A deal was struck with the Victorian Historic Racing Register (VHRR) in Australia, with the support of CAMS, to propose a F5000 support race at the Australian GP. The VHRR arranged races for F5000 cars at their Sandown and Phillip Island meetings, as preparation for the possible Grand Prix involvement, with 19 New Zealand runners expressing an interest, in addition to four existing Australian cars. Up to eight cars were planning to come from England, together with a smaller number from the USA.

Even though the Australian GP support race did not go ahead, at least not this year, an impressive total of 17 F5000 cars ran at Sandown, and 21 at Phillip Island. But if Kiwis were willing to "cross the ditch", the Aussies did not reciprocate in the same numbers and only 11 ran at either of the New Zealand races, where non-F5000s were still needed to pad out the grids. Ian Clements remained the man to beat, winning at Sandown Park against his regular Lola T332 rivals Murray Sinclair and Stan Redmond, and then holding off visiting Englishman Peter Dunn to win at Phillip Island.

The points system for this series required a serious Excel spreadsheet. Each event weekend included three races for the F5000 cars. Points were awarded for Race 1 and Race 2 (the two preliminary races) on a basis of 21-19-17-15 down to 3 points for 10th place and then 1 point for any additional starter. Race 3 (the feature race) scored double points. On OldRacingCars.com, we are still scarred by the experience of trying to decipher the points system for the 1981 New Zealand Grand Prix, so we follow our normal approach here of regarding each event weekend as a single race which incorporated two preliminaries and a final (or feature race).