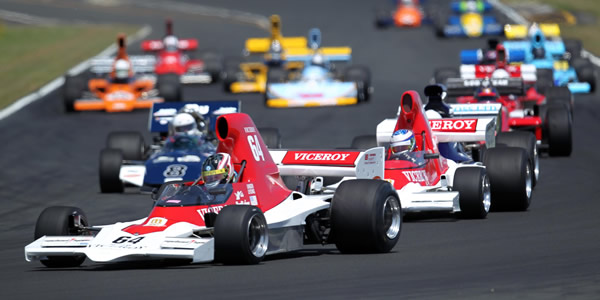 The new season started with Kenny Smith again in dominant form in his ex-Danny Ongais Lola T332, Andy Higgins' Lola T400 being his closest challenger at Manfeild. The usual English contingent arrived for the Hampton Downs double-header, with Michael Lyons pushing Smith hard in qualifying in his T400, the Vel's Parnelli Jones team car to Higgins' example. Smith led the first race but his engine seized, after which Lyons was able to win all three races. With Smith still out and Clark Proctor's March 73A sidelined with gearbox problems, Lyons did another treble on the second Hampton Downs weekend, with defending champion Steve Ross this time taking second place in the feature race in his McRae GM1. The Lyons family stayed on for the Skope Classic a week later, where Michael Lyons took over his father's Eagle 74A after the engine in his Lola T400 blew during practice. Lyons again took pole, more than a second faster than Ross, and won all three races, although the McRae driver led two of the races before Lyons imposed himself. Higgins had a scary moment in the final race when a wheel broke on the Lola T400, but he had amassed enough points over the four events to take the title.

The reason the Kiwi series was down to four races was that the Australians had decided to run their own championship, with a couple of V8 Supercars support races being added to the VHRR's well-established historic meetings at Sandown and Phillip Island. Tom Tweedie, a 25-year-old debutant, dominated the series in his father's ex-Aaron Lewis Chevron B24/B28, although it has to be noted that the car no longer looked much like a Chevron B24, having acquired updated bodywork over the years. Clark Proctor got close to Tweedie at the first race at Sydney Motorsport Park, but his engine failed in the second race, leaving Tweedie to beat Ken Smith easily in the feature. Richard Davison in the family's Lola T332 took pole at Sandown Park in September, and Kiwi Andy Higgins led at first in his Lola T400, but the Aucklander's brakes failed which allowed Tweedie to win all three races comfortably.

Historic Sandown clashed with a round of the New Zealand series, but the VHRR still attracted a field of 13 F5000s. Unfortunately, a series of accidents caused both prelimineries to be red-flagged and left only eight cars to contest the feature race, which was won by Tweedie by a country mile. The Phillip Island Classic completed the series, and here the F5000s had to run with the VHRR's usual eclectic collection of single seaters, from 1960s F2 cars and 1600cc single-cam ANF2 cars all the way up to an Indy car and a turbocharged F1. Tweedie's Chevron exceeded CAMS' noise limits so he was excluded from the meeting, resulting in the feature race being unusually competitive, with Paul Zazryn winning from Russell Greer, both in Lola T332s.

Including the four Australia Cup races, a total of 61 F5000 Tasman Revival events had taken place by the end of the 2013/14 season. The drivers who had taken part in the most were as follows.