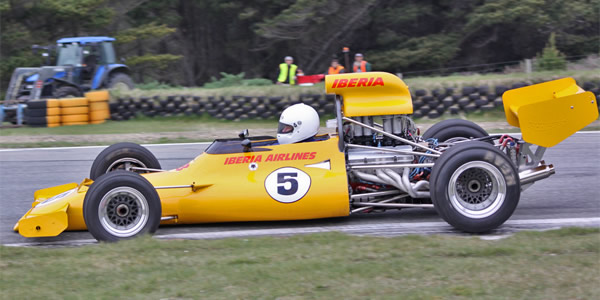 Former champion Chris Hyde returned to the series after a year away and won the opener and also the prestigous Australan Grand Prix support race in Stuart Lush's McRae GM1. Kenny Smith was his closest rival in David Abbott's Lola T430, and when the McRae broke, as it did at Hampton Downs and Pukekohe, Smith took victory, and wrapped up the title. Also very quick was Steve Ross, who had bought Alistair Hey's McRae GM1, the car that Hyde had used to win the 2008/09 title. Ross held a narrow points lead going into the final race but a half shaft sheared, and Smith took the points he needed to retain his title.

Grid sizes had surged, from less than 20 cars at each event in 2007/08, to 23 in 2008/09, and now to nearly 30 in 2009/10. The key reason was an enormous contingent over from England, led by the Lyons family with Eagle 74A, Lola T400 and Lola T332, and acccompanied by Daryl Taylor (Chevron B28), Mark Dwyer (Lola T332C), Greg Thornton (Surtees TS11), Grant Clearwater (McLaren M10A/B), Mike Whatley (Surtees TS8), Neil Glover (Lola T330), and Peter Dunn returning with his March 73A. Bruce Leeson was also back from the US with his McLaren M10B. Of the Kiwis, Warwick Mortimer had bought a Surtees TS5, Aaron Burson had bought Jay Esterer's McRae GM1, Stan Redmond had acquired a Lola T333CS from somewhere, and Brett Willis had a Lola T330 recently reconstructed by John Crawford.

A total of 35 F5000 Tasman Revival events had taken place by the end of this season. The drivers who had taken part in the most were as follows.