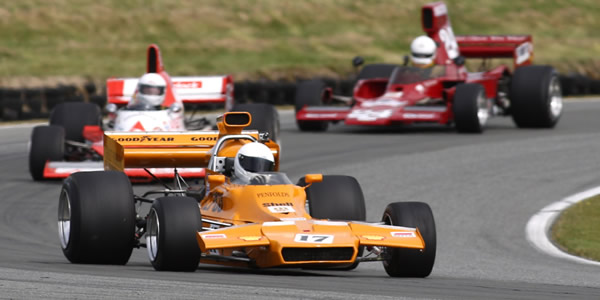 The season started earlier than usual as a race had been arranged at Sydney Motorsport Park (the former Eastern Creek) in September supporting the "Australian Muscle Car Masters". That drew a good field of 18, with Kiwi Steve Ross winning two races after Aussie Bryan Sala had taken pole and won the opener. Another good field of 14 was on hand for the Lady Wigram Trophy in October, where Ross was dominant, taking pole by 1.5 seconds and winning all three races. VHRR Historic Sandown had a race for F5000s but it was not part of the Revival series, and only seven cars turned up, with Andrew Robson just beating Paul Zazryn in the feature race. Two weeks later an "official" non-championship race was held at Sydney Motorsport Park with Kiwi support and 17 were present, with Robson again taking the spoils on home soil after Greg Thornton retire his ex-Stuart Lush McRae.

The NZ Festival of Motor Racing at Hampton Downs was a double header over two weekends, with Kenny Smith in his newly-rebuilt Lola T332, Steve Ross in his regular McRae, and Clark Proctor in the March 73A proving the quickest runners. Proctor then beat Ross and another large field at the Skope Classic, before the season ended at the Teretonga's Classic Speed Fest in February, where Proctor won the feature race from an on-form Andrew Higgins in his Lola T400. Proctor's late-season flourish lifted him to second place in the championship, but Ross easily retained his title.

A total of 53 F5000 Tasman Revival events had taken place by the end of the 2012/13 season. The drivers who had taken part in the most were as follows.